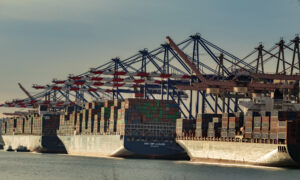 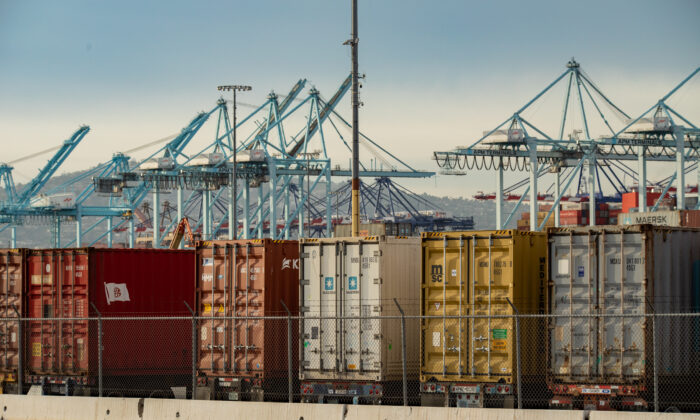 The twin ports of Los Angeles and Long Beach are seeing progress in reducing one of the worst backlogs of container ships in history, waiting in the San Pedro Bay.

The Los Angeles and Long Beach ports have been working to reduce the amount of backlog that saw up to 40 ships at anchor in early February. While port officials started to see a noticeable uptick in ships last July, ships didn’t start needing to be anchored in the bay until around last October, when the backlog began.

While the record backlog for some of the nation’s most important port terminals was caused by a variety of factors, Port of Long Beach Deputy Executive Director Noel Hacegaba told The Epoch Times that most of it can be tied back to the pandemic.

“For the year 2020, when the pandemic spread across Asia, it shut down manufacturing. Asia, for us, and China specifically, they’re our largest trading partners, so it had the effect of dwindling our cargo volumes, our cargo volumes sustained steep declines in the first quarter of 2020,” Hacegaba said, noting that exports from China make up 70 percent of the port’s business.

“Then manufacturing reopened in the spring of 2020 in China and there was a lot of pent-up supply, containers that would have arrived sooner if not for the pandemic. Those containers started making their way here, and then to add to that, with all the health orders that confined us to our homes here in the U.S, spending shifted quickly from services to goods because a lot of consumers were buying goods [through e-commerce] from home.”

Hacegaba said the combination of pent-up supply and a growing demand for goods catapulted the sea cargo business into a record year, with the ports handling 8.1 million container units in 2020.

The backlog was also attributed to COVID-19 safety protocols, which caused warehouses and distribution centers to operate under capacity, a factor that greatly slowed processing.

Right now, port officials are doing everything they can to reduce the backlog because of the national significance the ports have. Cargo that passes through its docks reaches all 435 congressional districts.

“The port is a massive economic engine,” Hacegaba said. “We generate one out of five jobs in Long Beach, over half a million jobs across Southern California, and we estimate that port operations through Long Beach supports over 2 million jobs in the nation.”

Back in February 2020, the Port of Long Beach established a business recovery task force when signs of an incoming pandemic were emerging.

The task force ensured that longshore workers and waterfront employees at the ports had access to personal protective equipment, rearranged shifts to give an hour in between to allow for facilities and equipment to be sanitized, and opened a COVID testing center that has conducted more than 22,000 tests since last August.

“As a result of all these efforts, we’ve never had to shut down the port once,” Hacegaba said.

After the cargo surge hit, the ports also opened a 40-acre site that has worked as a relief valve for the container ships waiting at anchorage to speed up the process.

“Our terminals were so busy that they couldn’t move the containers out of the terminal fast enough. So we made 40 acres available right on the port as a temporary staging area. We call that Project STOR. It stands for short-term overflow resource, and this allowed our terminals to move containers off of their yards immediately to make room for more containers which are sitting on these ships that are at anchorage,” Hacegaba said.

The port is remaining efficient with 50 percent dual transactions, which means that when a truck comes into the port to pick up a container, it drops off a container in the same truck visit.

To give customers and supply chain partners visibility into what is coming to the port in terms of volume of merchandise, the port is also delivering a weekly advanced volume estimate report that helps to manage congestion by allowing other companies to plan out their resources and equipment.

At the beginning of 2021, the ports estimated that they would see the backlog mostly cleared up by summer, though Hacegaba noted that they are estimating a return to normal, meaning zero container ships at anchorage, by late summer or early fall.

The return to normal can depend on several factors including the strength of the economy and whether consumers continue to spend money on goods exclusively or begin to switch back to purchasing more services as the economy opens up.

“We are working around the clock to ensure that our customers are receiving their goods and will continue doing our part to support the economic recovery,” Hacegaba said.