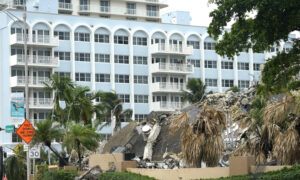 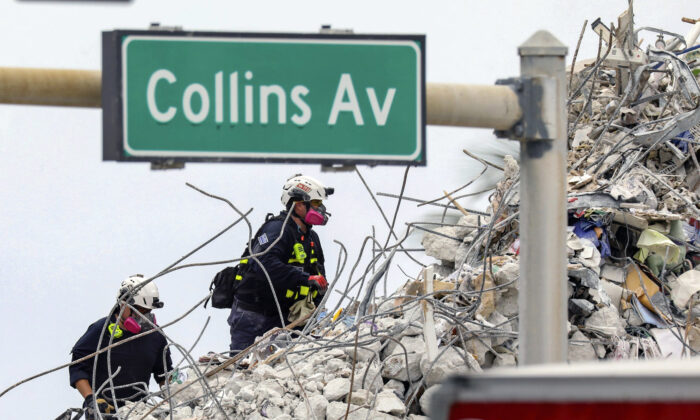 A search and rescue team members climb the rubble of the Champlain Towers South condo in Surfside, Fla., on July 7, 2021. (Al Diaz/Miami Herald via AP)
US News

With ‘Profound Sadness,’ Crews Shift From Rescue to Recovery at Surfside Collapse Site

Emergency workers engaged in the search and rescue operation at the collapsed condo in Surfside, Florida, have shifted their efforts to recovering the remains of victims on Wednesday as hope faded at the two week mark of finding any further survivors.

The Champlain Towers South, a residential oceanfront apartment building, collapsed at about 1:30 a.m. on June 24.

Rescue crews have been carrying out round-the-clock searches over the past 14 days. The formal transition from rescue to recovery was set to take place at midnight, with a moment of silence scheduled for shortly after 7 p.m.

“It’s with profound sadness that tonight we transition our operation from search and rescue to search and recovery,” Miami-Dade Mayor Daniella Levine Cava said in a statement late Wednesday. “May God bring peace to all whose hearts have been broken, and may He watch over our community in the hard days ahead.”

It’s with profound sadness that tonight we transition our operation from search and rescue to search and recovery.

May God bring peace to all whose hearts have been broken, and may He watch over our community in the hard days ahead. pic.twitter.com/EZgyaj78P1

The mayor tried to hold back tears at a news conference on Wednesday. “At this point, we have truly exhausted every option available to us in the search-and-rescue mission. Nothing we can do can bring back those who are lost,” she told reporters.

The Miami-Dade Fire Rescue said late Wednesday in a statement, “In tribute to lives lost, our rescue teams held a moment of silence & prayer near the Surfside building collapse, With heavy hearts, we begin search & recovery efforts, and will continue to give our all as our commitment still remains to reunite families with their loved ones.”

Over 200 first responders from across the country had as of Tuesday been working on the collapse site, digging and removing debris, the department said.

Florida Gov. Ron DeSantis previously said the rescue effort was “the largest deployment in a non-hurricane-related response in the history of the state.”

Eight more bodies were recovered on Wednesday and 10 bodies had been recovered overnight, bringing the death toll to 54. Of the recovered bodies, thirty-three have been identified. Meanwhile, 86 people remain unaccounted for.

He added that the likelihood of finding people still alive is now close to zero, despite efforts by rescue workers who have been looking for spaces between the mostly concrete and steel rubble potentially large enough to hold survivors.

Pointing to the way the 12-story building fell straight down where people are trapped and crushed between the floors, Jadallah said Wednesday, “We noticed the stress, the force of the pressure of the walls and the floors just pretty much again sustained no chance of life.”

He described the recoveries as “human remains,” suggesting that few intact bodies have been found.

The 12-story tower was built in 1981 and was in the process of being recertified as part of Florida’s 40-Year Recertification Program. Prior to the collapse, it was undergoing roof construction and other repairs.

Investigators have not established what caused the sudden collapse.

A 2018 engineering report had warned of structural deficiencies.

At least six lawsuits have been filed by family members of the residents of the tower since the collapse.

Separately, residents of a North Miami Beach condominium, Crestview Towers, were told to leave immediately last week after engineers found serious concrete and electrical problems. They have not been allowed to return as city officials try to determine if the building can be stabilized.