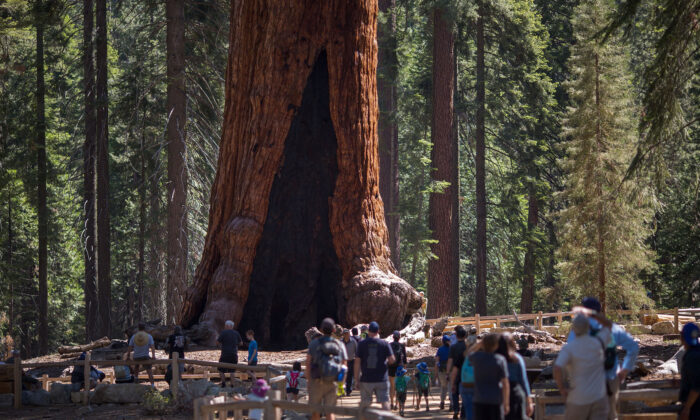 Visitors look at the Grizzly Giant tree in the Mariposa Grove of Giant Sequoias in Yosemite National Park, Calif., on May 21, 2018. (David McNew/AFP via Getty Images)
Regional News

Firefighters are taking measures to protect the 3,000-year-old Grizzly Giant, an iconic sequoia in Yosemite National Park, as the Washburn wildfire continues to grow.

In a video posted by the agency, a sprinkler system can be seen spraying water around the 209-feet Grizzly Giant, the most renowned giant sequoia in Yosemite National Park and the second-largest tree in Yosemite.

The firefighters have taken more measures to protect the giant sequoias in the Mariposa Grove area.

“While structure wrap is not currently being used on the giant sequoias, firefighters are proactively protecting the Mariposa Grove through the use of a ground-based sprinkler system. This increases the humidity in the area around the trees and combined with the removal of ground fuels, the ground fire risk is greatly reduced,” the Yosemite Fire and Aviation Management wrote in a statement on Monday.

The Washburn Fire, which was reported on July 7 near the Washburn Trail in the Mariposa Grove area of Yosemite National Park, had reached 2,340 acres by noon on Monday, according to an incident update.

Officially, there was zero containment of the fire, but fire information officer Marc Peebles said that some percentage of containment is expected to be announced later in the day.

The fire was a threat to more than 500 mature sequoias in the park’s Mariposa Grove and the nearby community of Wawona, which has been evacuated.

The area in the southern portion of Yosemite was closed to visitors but the rest of the national park remained open.

“Fortunately, the Mariposa Grove has a long history of prescribed burning and studies have shown that these efforts reduce the impacts of high-severity unwanted fire,” a National Park Service statement said.

The giant sequoias, native in only about 70 groves spread along the western slope of the Sierra Nevada, were once considered impervious to flames but have become increasingly vulnerable as wildfires, fueled by a buildup of undergrowth from a century of fire suppression and the impact of drought, have become more intense and destructive.

Lightning-sparked wildfires over the past two years have killed up to a fifth of the estimated 75,000 large sequoias, the biggest trees by volume and a significant draw for tourists.