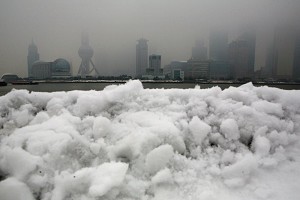 'Crematoriums Have No Fuel to Burn the Bodies of Snowstorm Victims'

Current heavy snowstorms have caused power failures and severe daily supply shortages in many areas of China. For days, The Epoch Times has received messages from Internet users in those cities. On January 30, an IT employee from southwest China's Guizhou province traffic department sent out messages.

He reports that a snowstorm caused the breakdown of the main rail line in Guizhou and has cut off electricity in the eastern part. Renhuan City in Guizhou has been hit most severely with no water or electricity for two weeks already. All roads to the outside have been closed. The entire police department he belongs to was sent to the Renhuan area for rescue work.

He sent the following message: “Some people have already frozen to death but crematoriums have no fuel to cremate the bodies. If the central government does not take emergency measures to airdrop food supplies, there will soon be many more deaths here.

“Renhuan City is now a dead city. The central streets are covered by a layer of ice; some roofs are covered with ice 7cm (2.75 inches) thick. Due to a manpower shortage, our entire traffic police force are on the streets and they are about to collapse from exhaustion. This is the most brutal disaster that I have ever experienced. Sometimes I can't help but wonder if this is just a movie. How nice it would be to have stability and peace.

“Nothing can be sent here. Roads are treacherous. Oil trucks have skidded and turned over on the highway and even the administration center has no electricity. Coal costs 24 yuan (US$3.20) a kilo, candles 5 yuan (US$ 0.67) a stick, frozen cabbage 10 yuan (US$1.35) a kilo and there are limited quantities. The government is helpless too. The situation here can only last 2 days at the most.

“We have lost contact with the counties and towns under us for half a month. The situation over there is probably even worse. All cell phones and equipment are out of electricity. How can we communicate or take photos?

“I am currently using the only usable fiber optical channel, which is currently dedicated for government use only, but the alarm on its UPS (Uninterrupted Power Supplier) has sounded several times and it to will soon be dead.

“There are so many areas hit by this adversity spreading to so many provinces, cities, districts, counties and towns. I can't be overcritical to investigate who is responsible for causing such a calamity, but can only hope the central government will step up rescue efforts and mobilize all possible means to rescue our homes and fellow countrymen.”