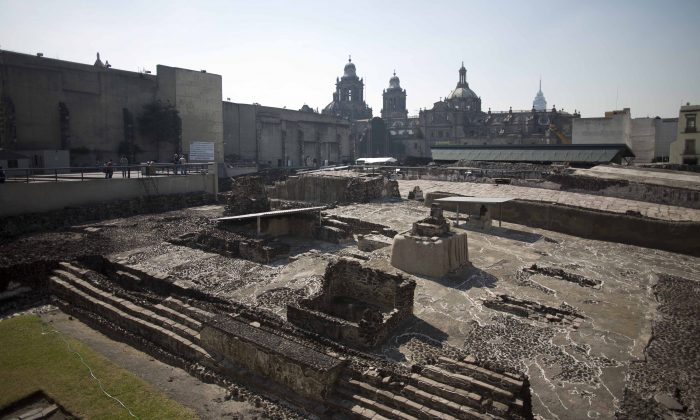 Tourists visit the Templo Mayor archaeological site in Mexico City, Tuesday Dec. 1, 2015. Mexican archaeologists have discovered at the archaeological site a long tunnel leading into the center of a circular platform where Aztec rulers were believed to be cremated. The Aztecs are believed to have cremated the remains of their leaders during their 1325-1521 rule, but the final resting place of the cremains has never been found. (AP Photo/Eduardo Verdugo)
Science

A strange and unknown hidden passageway was discovered in Templo Mayor, an Aztec pyramid that was one of the main temples the civilization used in their capital of Tenochtitlan, according to researchers this week.

The tunnel-like passageway apparently leads to two sealed chambers, and they might contain the cremated remains of leaders during the Aztecs’ 1325-1521 rule. The final resting place remains have never been found.

The National Institute of Anthropology and History said Monday that a team headed by archaeologist Leonardo Lopez Lujan found a 27-foot-long tunnel leading into the center of a platform where rulers may have been cremated. The entry of the tunnel was sealed with a 3-ton slab of rock, which was lifted in 2013, reported The Associated Press.

The Aztec Calendar Wheel and the Philosophy of Time

When the rock was unsealed, researchers found the bones of infants and eagles. Two skulls of children between the ages of 5 and 7 were also located. Experts believe the infants were decapitated. And stone knives that were used in human sacrifices were also found.

“Once the rocks and dirt were dug out, we saw that it led directly into the heart of the Cuauhxicalco,” archaeologist Leonardo Lopez Lujan told the news agency. “At the end (of the passageway), there are what appear to be two old entrances that had been sealed up with masonry.”

According to Aztec tradition, Templo Mayor is located at the exact spot where the god Huitzilopochtli gave the Aztec people a sign they had found the promised land. The sign was an eagle on a nopal cactus with a snake in its mouth. The temple was razed to the ground by the Spanish in 1521.

Our country is rich in #history! An ancient #Aztec tomb has just been discovered https://t.co/ySoiyQ4lkg pic.twitter.com/dfgG1ExWqR

The temple was the preeminent complex in the Aztec capital, and it would be logical for the rulers of the civilization to be buried there.

“The hypothesis is that there will be two small chambers with urns holding the ashes of Mexica rulers, but we could be wrong,” Lopez Lujan added, per RedOrbit.

“What we are speculating is that behind these sealed-up entrances there could be two small chambers with the incinerated remains of some rulers of Tenochtitlan, like Moctezuma I and his successors, Axayacatl and Tízoc, given the relative dating of the surrounding constructions.”