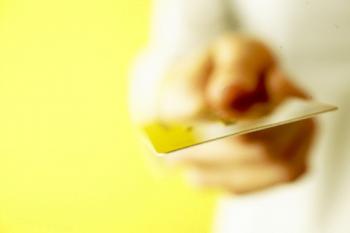 Credit cards with cash-back rewards were found to result in more spending and debt for the average credit card user, a recent study has found. (Photos.com)
Business & Markets

Mimi Li
View profile
Follow
biggersmaller
Print
Credit cards with cash-back rewards were found to result in more spending and debt for the average credit card user, a recent study by the Federal Reserve Bank of Chicago has found.

These cards offer 1 to 5 percent “cash back” rewards which return that percentage of what the total charges on the credit card in the form of perks and benefits.

In analyzing 1 percent cash-back rewards programs for credit cards, the study found that the credit card users spent an average of $68 more than they normally would have, and accrued $115 more in credit card debt, during the first month of during the reward cards.

For those rewards credit card users who were given a monthly $25 back, spending and debt jumped to $79 and $191, the study noted.

However, the effect to credit card companies has been a boon: the paper found that 11 percent of dormant cardholders starting using the cards after being enrolled in a cash-back program.

Because of the clear responses to cash-back rewards, financial institutions have been especially aggressive in promoting the programs: about six billion rewards card offers were sent out by the industry in 2005 alone, the study stated.