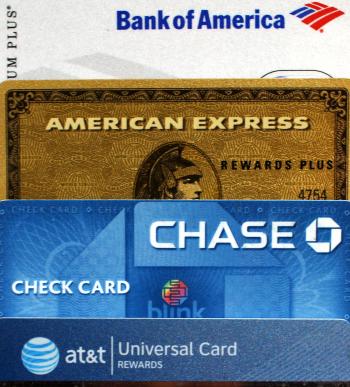 Consumers are happier with their credit cards, according to a new survey. (Spencer Platt/Getty Images)
Business & Economy

CARD is intended to simplify credit card disclosures and protects borrowers from exorbitant fees, rate hikes, and phantom charges. JD Power’s customer satisfaction index ticked up 9 points in 2010, to 714 from 705 in 2009.

The CARD Act, on the whole, helps those who carry monthly balances as it forces credit card companies to make further disclosures and warn in advance about rate hikes and credit card terms.

American Express Co.’s credit cards came in at No. 1 in customer satisfaction, according to JD Power, for the fourth consecutive year.

American Express scored an average of 769 points, or 55 points above the industry norm, due to its “exceptional rewards and benefits offerings,” according to JD Power.

HSBC came in last place among all credit card issuers on the survey, followed by Citi Cards and Capital One Bank.