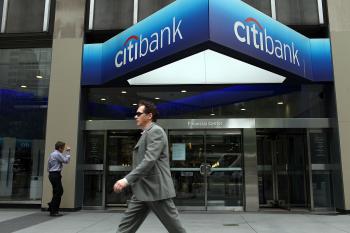 Alex Johnston
View profile
Follow
biggersmaller
Print
Credit cards are to get revamped soon with Citibank testing out a card with two buttons that allows users to pay using either rewards points or credit, according to the New York Times.

The cards, known as the 2G, will be released next month.

Each of the 2G cards will be outfitted with lights, a four-year lifespan battery, a computer chip, and the two aforementioned buttons.

The rewards points will be compiled from previous purchases with the 2G card.

The new cards will move past the simple magnetic strip technology currently on the nearly 2 billion cards in the US, the Times article notes, and will be replaced with a teeny computer chip. Other than Citi, credit card giants Visa and MasterCard, and even Apple will be developing cards with chips.

“We’ve developed a proprietary technology that will allow Citi to do the conversion when the transaction comes through,” Terry O’Neil, executive vice president of Citi Cards, told the Times.

“All they need to do is push that request-rewards button and we take care of everything else for them. They leave the store with the merchandise they selected.”

A Time magazine 'It’s Your Money' article critiqued the newfangled device, saying that it adds too much complexity to the process.

“I know plenty of consumers who are just mastering—and who sometimes still screw up—the ‘credit or debit’ question at the point of purchase," the article's author noted. “Here's another question that they'll have to address, and that they'll potentially be mystified by.”

Furthermore, Citi didn’t specify if the cards will cost more, the article noted.