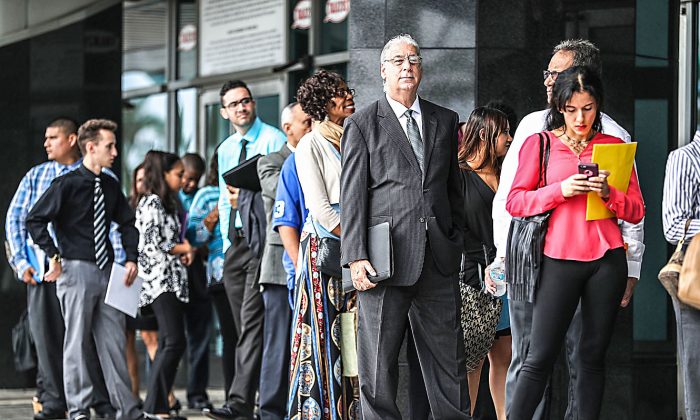 People stand in line as they wait to get into a job fair in Sunrise, Fla., on Nov. 15, 2016. (Joe Raedle/Getty Images)
Business

Despite the temporary injection of confidence in the American economy brought about by the election of President Donald Trump, major structural problems continue to lurk beneath the surface. These trends, decades in the making, are so entrenched and intractable that even Trump’s boldest plans may not be able to resolve them.

For many Americans, this is the economy: rising prices for necessities, schooling, and health care; high competition for jobs that don’t pay much; negative interest rates; and the accumulation of increasing influence and power by financial institutions.

It’s no wonder so many feel disenfranchised and upset. The system of capitalism is usually given the blame for income inequality; last year, many identified with Bernie Sanders, a self-described socialist who promised that the government would be able to fix (almost) everything.

The real picture is more nuanced, according to Macquarie Group global strategist Viktor Shvets, who does not propose any easy solutions to the most difficult problems facing the United States and the world. Shvets does note, however, that under a genuine capitalist economy, many of the present imbalances would likely not have become as entrenched in the first place.

Epoch Times: Why are people so unhappy with the economic system right now?

We have too much overcapacity and too little labor productivity. The No. 1 problem is technology itself, which is depressing labor productivity and changing how labor inputs are valued. It’s altering how we invest, and it globalizes us much more than we’d like.

But the other problem is what we’ve created for ourselves, and that is global over-financialization and overleveraging, which is a direct consequence of the societal desire for growth, despite stagnating productivity.

Trump’s Budget Versus the Debt Ceiling

All of this leads to stagnating incomes and, perhaps more importantly, disintegration of conventional labor markets and traditional professions and career paths, which feeds into questions like “What do you think of yourself and your contribution?” and “How valuable are you, and how important are you to your employer?” The younger generations, particularly millennials or anybody born from the mid-1970s onward, really feel that they probably got a raw bargain.

So you get the conflict between people’s self-perception—what they would like to be—and the reality of where they actually are. Whenever societies and economies go through these periods, people feel the system doesn’t work for them. And it doesn’t.

Epoch Times: However, in real capitalism, overcapacity and too much debt could have been prevented by periodic cleanups—what Austrian economist Joseph Schumpeter called “creative destruction.”

Mr. Shvets: Theoretically, what should have happened if we had a relatively free economy, is that the only role of government would be to ensure that monopolies were not created, that law and order were maintained, and that basic infrastructure needs were taken care of.

Beyond that, the Austrian school of economics would have allowed businesses and industries to fail and capital to be allocated however the private sector deemed it appropriate. In other words, there would be a purging of excesses, businesses, and industries.

You could have eliminated the overleveraging and associated overcapacity—which, by the way, is now one of the factors depressing productivity—and that would have meant watching banks fail and people losing their deposits, so that the next time around, they would be more careful where they put their money.

The problem is that, since the early 1930s, nobody ever tried to do this because the political and social impact of that scenario would have been devastating.

Epoch Times: So now people look more and more to the government to solve these problems?

Mr. Shvets: Over the last decade, the pendulum has been swinging toward the state and public sectors being more and more proactive. Whether it’s allocation of capital or forcing corporates to invest or not invest in certain areas, the state is becoming much more dominant.

The consensus narrative today is that state-sponsored infrastructure spending is a “good thing,” and that government spending, in general, is something to encourage. Who would have thought in the 1980s and 1990s that people today would be applauding government and infrastructure spending? But that’s exactly what’s happening now. People say, “Look, there’s an alternative.”

Of course, a conventional economist would argue that all we need to do is increase productivity. And they will argue that what is missing from the productivity puzzle is investment—nonresidential, fixed-asset investment.

If we can just invest more money, people become more productive. And higher productivity will feed into higher wages while containing inflation. And that would then feed into higher consumption and growth rates.

The problem with that argument is that there are reasons for why corporates have not been investing for decades, and those reasons today are just as valid as they were decades ago.

Also, most of such investments look likely to be steered, or underwritten, by the public sector. The government is trying to induce the private sector to invest in areas where it never would have invested if left to its own devices. That’s hardly a recipe for productivity enhancement.

To my mind, the traditional argument that all you need is higher investment to kick-start the productivity cycle is faulty.

Epoch Times: In fact, you argue we have too much capital and overcapacity.

Mr. Shvets: Most of the new activities are capital light. You don’t need much capital. And most new private-sector activities today have an almost unlimited scale.

In the 19th and 20th centuries, scalability was very important, and we had a problem with a lack of capital, and most fields were very capital-intensive. We needed lots of labor inputs. We needed to put in more hours. In other words, labor needed to be productively married to machinery and the management’s task was to “sweat labor inputs.”

In the new world of the 21st century, we have plenty of capital, and indeed one could argue that we are drowning in capital while most operations are no longer capital intensive and hours worked are no longer the driver of productivity. There is no reason for corporates to increase investment in traditional infrastructure and factories because that’s not what’s going to drive their businesses forward.

There is also a need to maintain core infrastructure so that there are no accidents, and diseases do not spread. But beyond that, in my view, there is very little physical investment required in most developed markets, and even a large portion of emerging markets.

Epoch Times: And we have a lot of debt. How do we get rid of that?

Mr. Shvets: The debt that’s been incurred would either have to be whittled down through some form of inflation, which gets harder and harder to generate when you have technology and overleveraging, or it would have to be bought up by central banks. A lot of the debt that has been generated was never meant to be repaid.

Car loans ensure that people who couldn’t afford a car can get one. I don’t see those loans ever being repaid. Student loans in the United States are a consumption support mechanism by the U.S. government. That’s never going to get repaid.

But that’s fine, as long as the ball keeps rolling. As long as the new debt is being pumped in, it’s okay. It’s like surfing—you have to keep standing to stay on the wave, or you’ll fall.