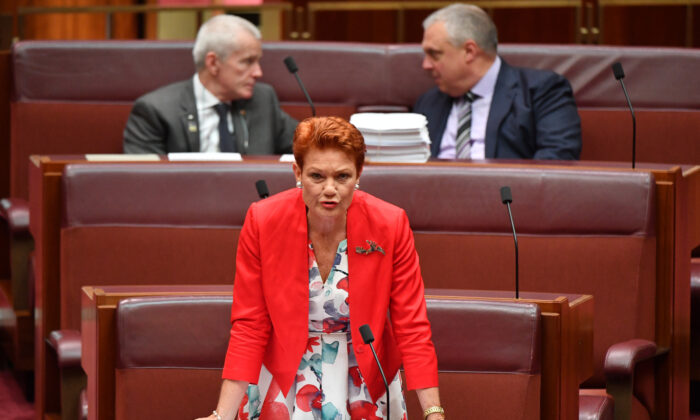 Senator Pauline Hanson speaks as Senators Malcolm Roberts (top left) and Stirling Griff (top right) look on during debate of the Fair Work Amendment Bill 2021 in the Senate at Parliament House on March 18, 2021 in Canberra, Australia. Senator Stirling Griff has issued a statement confirming that Centre Alliance only supports changes to casuals provisions and wage theft and will not support the rest of the Industrial Relations omnibus bill. (Photo by Sam Mooy/Getty Images)
Australia

One Nation party will vote against entrenching the Indigenous voice in parliament in the upcoming referendum, with its leader arguing the proposal does not address real Indigenous disadvantages while risking dividing Australians on race.

Queensland Senator Pauline Hanson compared the Indigenous Voice to “apartheid” because it gives a minority of people more political power than the majority based on race.

Hanson added she’s confident that “all of us want Indigenous people to be empowered to seize the many opportunities which come with living, learning and working in Australia.”

“We also have no idea how much this entire exercise will cost the Australian taxpayer, but a single-question referendum alone will almost certainly cost in excess of $120 million,” she noted.

Currently, the strategy for an Indigenous Voice will be to establish a body consisting of Indigenous people in parliament, which potentially could have the capacity to inform or make laws on matters relating to Aboriginal people in Australia. However, the formation of such a body will require the constitution to be altered through a referendum.

But, Prime Minister Anthony Albanese, who has pushed for the change to be made, has refused to reveal further details about the proposal until after the referendum, saying he doesn’t want people to disagree with the clauses and then vote no.

The move has sparked skepticism and calls for greater clarity from the Coalition as well as prominent Indigenous figures.

Meanwhile, Indigenous leader Warren Mundine said he remains unsupportive of the proposal because a constitutional body cannot speak for the diverse communities of Aboriginal people around Australia as many of whom don’t find it aligns with their identities.

“I predict the Voice will be just another bureaucratic structure that further entrenches government into Aboriginal lives,” he argued in an op-ed on the Daily Telegraph on Aug. 1. “The campaign in championed by Australia’s elites, including corporate Australia, media figures and Aboriginal academics.”

The Commonwealth has previously created Indigenous bodies, including the National Aboriginal Consultative Committee, ATSIC and the National Congress of Australia’s First Peoples.

Parliament Divided on the Voice

Nationals leader David Littleproud said his party will keep an “open mind” but questioned whether the proposal, like other laws relating to Indigenous issues, would necessarily lead to positive outcomes despite its “good intentions.”

“Now is the time for the government to tell us the detail of what they’re picking out of that report, how this is going to operate, who’s going to be on it, how will that go to building trust, and not just across Australia but also with Indigenous communities.”

“It would be a lost opportunity if the government doesn’t get this right.”

Meanwhile, the Greens have pushed for stronger action, with Greens Indigenous spokeswoman Lidia Thorpe calling on the government to also implement a treaty and a “truth commission.”

“If the PM wants to heal this nation and unify people, he needs to understand that ‘sovereignty never ceded’ is more than a slogan. It’s a call to action. It’s time to tell the truth about our country,” Thorpe said on Aug. 5.

In July, Albanese put forward a suggested question for the referendum: “Do you support an alteration to the Constitution that establishes an Aboriginal and Torres Strait Islander Voice?”