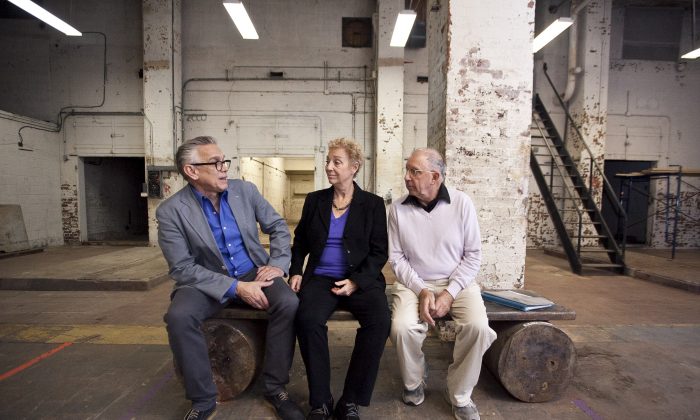 NEW YORK—When Paul Binnerts decided to write a play about his Sandy experience, one of the most important characters was his apartment building.

Binnerts, a Dutch playwright and director, is a resident at Westbeth Artists’ Housing in Manhattan’s West Village. Like so many other buildings in Lower Manhattan, its basement was completely flooded during the storm.

Westbeth’s basement was home to 70 artist studios. It flooded between 10 and 12 feet, and at one point caught fire, leaving only a slim number of salvageable remnants of paintings, sculptures, photography, and metalwork, as well as tools.

Today, the basement is empty. All that is left is a strong odor.

Binnerts plans to use the basement’s main entry space as part of his play, “Lost and Found, Scenes from After the Flood.”

The play, which is running at Westbeth from Oct. 24–27, will move through different parts of the building. For Binnerts (who has lived there since 1990), the play is a way to express the fragility, the impermanence, and the ultimate preciousness of life.

Recalling the flooding, Binnerts said, “The helplessness and the feeling of devastation was so enormous.”

“Everybody is reacting in a different way,” he said. “On a very subconscious level, if you realize nothing is safe or secure and you can lose it in the blink of an eye, you can’t take it for granted.”

The 384-unit Westbeth apartment building is a complex of 13 buildings situated on the edge of the Hudson River. It opened in 1970 with funding from the National Endowment for the Arts and the J.M. Kaplan Fund as a way to increase affordable housing and studio space for artists and their families.

On the night of the storm, water rushed into the basement, which stretches the length of Bethune Street, and flooded all of it in the blink of an eye. Some residents saw the water coming.

“I watched the water come up from Bethune Street,” said Nancy Gabor, a theater director who formerly worked at Princeton University. Gabor, who is married to Binnerts and is directing the play, has lived in the building since 1974. She said it wasn’t long before people began to realize the enormity of what they’d lost.

Within mere minutes, water broke through small side windows and maintenance entrances and completely flooded the basement. Then the power went out, and stayed that way for days. Even a year later, some of Westbeth’s many elevators still aren’t working.

Gabor said although they are now aware they are in a danger zone, after the storm residents almost immediately went into recovery and assessment mode.

“We had to come together,” she said. “There was a tremendous output of energy. There were floor captains. We all talked to each other.”

Many people were intensely focused on what had happened in the basement.

“The residents, and particularly the artists said, ‘We have to get down there,'” said Gabor of the panic that set in after the massive influx of water stopped.

One of them was Karen Santry, a fine arts painter and 23-year resident of Westbeth who teaches at the Fashion Institute of Technology.

“I remained intensely in denial about what was lost,” said Santry, who by her own reckoning saw over 8,500 of her drawings destroyed. “I couldn’t understand the loss of the work.”

Though Santry and many others like her had years of work and thousands of dollars in expensive equipment evaporate, they have not given up on their art or the building.

The rental fees from the basement represented a certain value to the building as well, according to George Cominskie, a 30-year resident and president of the Westbeth Artists Residents Council.

“The income of the building is less and a lot of people have had to get studios some place else,” said Cominskie, who added that having an offsite studio means a commute for artists who used to be able to “get from work to home in 6 minutes.”

The loss of the basement studios, which the building superintendent said they are still working to repair, has created challenges for the few remaining studios on higher ground.

One building has 20 studios on an upper floor, but some units have been occupied for decades by the same artists. Once residents acquire studios, they can use them indefinitely. In one case, an artist in his 80s has used a space for about four decades, but a younger artist now needs it.

“Do you say to the older artist, ‘You need to move out,'” asked Cominskie.

Despite the many new challenges, Cominskie and others remain intensely optimistic about their unique residence, its future, and its place in the life of New York City.

“I love this building,” said Cominskie, whose apartment affords a breathtaking view of the Hudson River. “When you talk about Bohemia, Greenwich Village—this is it.”