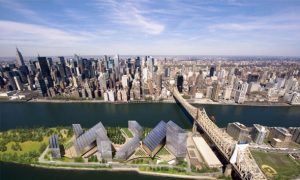 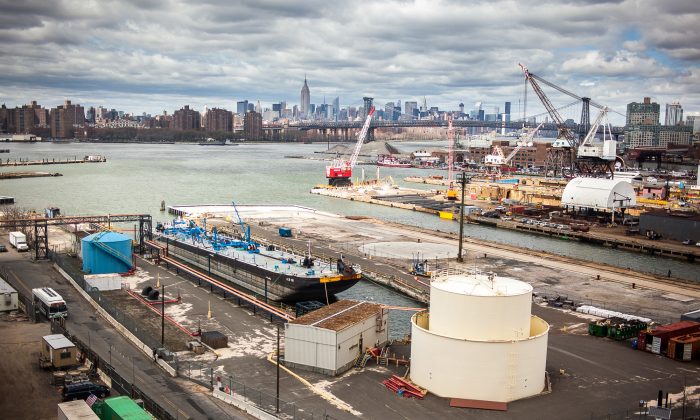 Creating a Model for Urban Manufacturing in NYC

NEW YORK—A 10 minute-walk from one of the city’s hottest tech hubs is a fenced-in former shipyard known as the Brooklyn Navy Yard that has helped to pioneer the revitalization of manufacturing in New York City.

A majority of New York City’s 21 industrial business zones (IBZ) are located along the water’s edge. Very much remnants of an earlier era, the repurposed old warehouses and yards now support a new form of manufacturing and innovation. With a lot of help from former Mayor Michael Bloomberg, the sector has stabilized and is positioned for growth.

Among the most successful zones is the Brooklyn Navy Yard, a diverse business hub with a mission-driven government supporting 330-plus businesses and 7,000 jobs.

These are jobs leading directly to the middle class, with average pay of $50,000 yearly, and low barriers to entry. With an eye to enhancing opportunity for more New Yorkers, last week the new City Council met to look at whether the Brooklyn Navy Yard model can be replicated in other parts of the city.

Now at 100 percent occupancy, the Brooklyn Navy Yard Development Corporation (BNYDC) managing the site still gets three to five phone calls a day from people wanting to lease space. The Navy Yard has 3 million square feet of space in development, and 50 acres of developable land left.

The Navy Yard was taken over by the city in the mid-1960s, but it wasn’t until the late 1990s that it was considered successful. The revitalization came as management realized most companies did not want these giant warehouses; new manufacturing was of a different breed and had different needs.

“We led in that revitalization, we created that model,” BNYDC CEO David Ehrenberg said. Companies came in demanding smaller spaces, but with room to grow. “The Yard was at the forefront of that.”

Unlike other industrial-zoned areas in the city, the Navy Yard is city-owned land run by a mission-driven nonprofit, which gives tenants security they may not find elsewhere, said Ehrenberg at a City Council hearing April 24.

Rents are cheaper than elsewhere in the city, and the leases are longer, something that business owners prefer. The Navy Yard recently offered a tenant looking to expand a 39-year lease.

“That’s very hard to come by, even in IBZs,” Ehrenberg said.

The BNYDC’s focus is nurturing businesses that provide lots of jobs, and creating a diverse mix so there is a sustainable stock of jobs in the industrial park.

Tenants benefit from the diversity as well, which creates a campus-like environment. One tenant may have a specialized fabric-cutting machine, while another specializes in steel fabrication, or woodwork, and the companies share and collaborate.

The diverse nature of each IBZ requires the help of a local organization to champion its needs and foster a successful industrial sector, Economic Development Corporation Chief Operating Officer Zac Smith said at the council hearing. It’s not a one-size-fits-all situation.

In East New York, the industrial zone is comprised largely of companies working with steel, transportation, and the construction trade. These are manufacturers that have become vital to the customers they serve and offer supplies locally. For instance, some of the trucking equipment that city agencies use is manufactured locally.

“We have lighting fixtures ten feet away from concrete, ten feet away from electrical wiring,” said Bill Wilkins of the East Brooklyn District Management Association, which was contracted to oversee the East New York IBZ. “You need a local organization able to galvanize all these businesses.”

The Livonia Commons housing project in East New York recently broke ground and the East Brooklyn organization was able to approach its developers and request they source locally.

In Long Island City’s IBZ, the neighborhood’s convenient location has businesses in every sector, industrial or not, seeking space there. The neighborhood’s access to transportation rivals that of Lower Manhattan, with access to 12 bus lines and 8 subway lines, as well as rail, ferry, and bridges.

The businesses range from the Brooks Brothers’ tie manufacturing facility to blown glass artists. In terms of sectors, “There is so much overlap,” said Elizabeth Lusskin, president of the Long Island City Partnership, which manages the local IBZ. “Even a concrete company is a tech company today.”

But because so many of these companies are new, price sensitive, and not yet able to take advantage of the IBZ’s tax incentives, it requires a steady partnership to keep these startups in the city, Lusskin said.

“You always hear about the company that leaves and takes a hundred jobs, but you never hear about the thousands of smaller companies that leave,” said Lusskin. And they do leave. Unlike established companies with heavy machinery and high relocation costs, there is always a risk startups may be more attracted to New Jersey’s $5-per-square-foot costs and one-stop-shop of incentives.

Unlike the Navy Yard’s fenced-in lot, Long Island City’s IBZ is scattered. Vacancy is less than 1 percent in the area, and every sector wants to grow.

This becomes a problem for city-owned and managed industrial zones because industrial development, which generates much lower returns than retail or residential, is not glamorous or easy to finance.

Brooklyn Army Terminal (BAT) on the southwest Brooklyn waterfront, for example, is not even close to full occupancy. BAT is city-owned and managed, which means the money EDC collects from BAT goes toward other workforce development projects and the city in yearly payments—a primary difference. The money the Navy Yard collects from tenants goes directly back into investing in the zone.

BAT has a 55,000-square-foot space in development, but hundreds of thousands more in square footage available that would require a significant capital investment before it could be used.

“Without new city capital funding however, the large majority of vacant space at BAT will remain vacant,” Smith said.