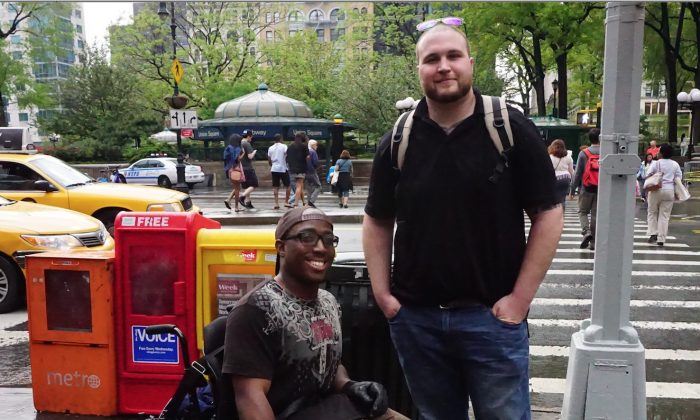 Creating a Guide to an Accessible NYC

NEW YORK—Coming to school in New York City was always the dream for Anthony Driscoll, a design student from Pennsylvania with a background in traditional visual arts and partiality to functional design. After a visit from his handicapped father, Driscoll, now a graduate student at Parsons, realized much of the city was not functional for a population of at least half a million people in New York.

In 2001, Driscoll’s father, a war veteran, was diagnosed with multiple sclerosis and has spent the last two years in a wheelchair.

“New York City is one of the least accessible cities in the country,” Driscoll said. “If you ask someone whether New York’s accessible, there are two answers: It’s accessible if you know where to go, or it’s not accessible.”

So Driscoll determined he would compile the knowledge of those who do know where to go, and share it with everyone else in a project he calls Wheely. He’s recently launched a Kickstarter to crowd fund his way to a mobile application giving users a map to accessible transportation, restrooms, restaurants, and attractions.

“Because if you’re a tourist or new to the city, you’re not going to know where to go,” Driscoll said. “I see design as a way to help people.”

The problem doesn’t end when one identifies a restaurant or a subway stop as accessible.

When Driscoll’s parents came to visit, he combed through reviews to find several accessible restaurants for dinner before the planned Broadway show.

“We went to four different places listed and reviewed as accessible, and only the fourth one was actually accessible,” Driscoll said. And even then, the restroom was hard to access for a wheelchair user, and the tables were so low his father had to sit over a foot away from the table to eat.

Transportation, too, is a notorious hassle. Out of the city’s 468 subway stations, less than 20 percent are accessible, but only a fraction of those 88 stations’ elevators may be working at any given time.

“And sometimes the elevator is down a block from the station [as shown on a map] … and inside a store,” Driscoll said. The signage can also be difficult to find, or read from the point of view of someone sitting in a wheelchair.

To solve this, the first phase of Driscoll’s project creates an app showing the MTA subway map with only the accessible stations listed, mapped by elevator with real-time information on whether the elevator is working.

Carr Massi has lived in Chelsea for 35 years and uses a power wheelchair. The city is accessible if you know where to go, Massi said.

The subways don’t work for her because the elevators don’t always work, “stress-a-ride” requires a day’s notice on top of showing up in an untimely manner, so she opts for four buses a day or frequenting the familiar establishments in her neighborhood.

“Overall it’s fairly easy, we have the buses. But in the outer boroughs they’re not very good at all,” Massi said.

“If you live in the outer boroughs, you need to go to a different borough, or you have a problem,” said Jean Ryan, who used the city’s subway system for 25 years and ended up buying a house in Brooklyn deliberately close to a subway station. Then just a year afterward, she was no longer able to use the station.

“I had been using a cane, then two canes, then two crutches. It just became too difficult,” Ryan said. For about 20 years now, she has used a powered wheelchair. As a disability rights activist, Ryan travels frequently across many boroughs and is often invited to fundraisers.

She’s lucky to have an express bus station in her neighborhood, Ryan says, but allowing a wheelchair onto one of the big express buses is a hassle. Drivers need to exit the bus to operate the lift and sometimes do not know how to do it. Other times, the equipment is broken and does not work, in Ryan’s experience. She was once stuck on an empty bus for over an hour because the driver did not know how to help her off, and ended up spending three hours on a 35-minute trip.

Ryan relies almost exclusively on Access-A-Ride, which does not allow her to be spontaneous because they need to be arranged the day before.

She tried calling for a taxi once, and it came over an hour later than the reservation, causing her to miss her meeting. Less than 5 percent of the present taxi fleet is accessible and only about a third are on the road at any given time.

Her hope is to access a service as reliable as the subways.

“In 2020 we’ll have [an elevator station] in our neighborhood,” Ryan said. “I’ll be 75 then. I’ll definitely be a senior citizen then. Who knows if I’ll still be alive? Really.”

But the long trips haven’t stopped Ryan from traveling to three boroughs in a week, and catching a foreign film or two at the Lincoln Plaza Cinema.

“It’s sad because years ago people with disabilities were kept in houses, hidden,” Ryan said. “Now we’re getting a little better.”