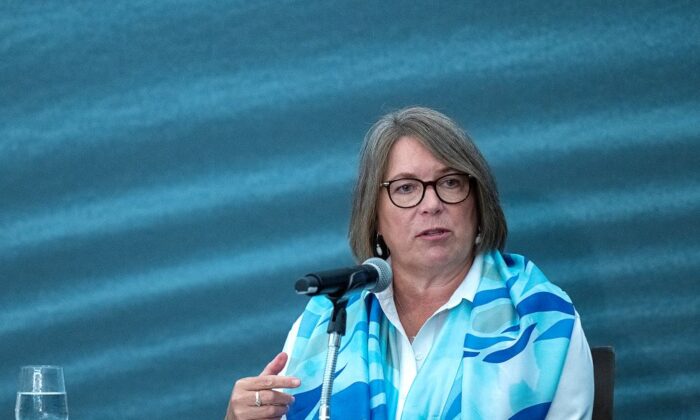 RCMP Commissioner Brenda Lucki testifies at the Mass Casualty Commission inquiry into the mass murders in rural Nova Scotia on April 18 and 19, 2020, in Halifax on Aug. 23, 2022. (The Canadian Press/Andrew Vaughan)
Canada

A lawyer representing some of the families of victims of the 2020 Nova Scotia mass killing challenged RCMP Commissioner Brenda Lucki on why she raised the issue of the Liberal government’s gun control legislation, since it didn’t relate to the investigation into the killings, which were carried out with weapons obtained illegally and smuggled in from the United States.

“You can’t point to anything that would suggest that there’s a logical connection between what happened here in Nova Scotia and those issues being addressed by that legislation, legislation that was announced on May 1, 2020?” asked Michael Scott of Patterson Law, as Lucki appeared on Aug. 23 before the Mass Casualty Commission, a public inquiry into the tragedy.

The legislation Scott was referring to was a ban on 1,500 “assault-style” weapons introduced by the Liberal government shortly after the killings.

“No, I wouldn’t,” responded Lucki.

“You can appreciate that there are those that’d be concerned that the optics of that, the collective grief and pain of my clients and others, was being exploited to affect the crass political objectives of legislators. You can see why that would be a very serious issue, and one that we would be very interested in?” Scott asked.

Lucki replied: “I could see that as being an issue, but it’s not something that is at all when you talk about that. I could see the optics of that, absolutely, but … I can’t make that connection for you.”

Scott pre-empted his line of questioning by asking Lucki why she had suggested the government was looking for information on the guns used in the tragedy—including at an internal RCMP meeting on April 28, 2020—because of upcoming legislation, while the legislation wasn’t related to issues such as illegal gun smuggling across the border.

“I was hoping that you could help me with … what is the connection between that legislation, and what happened here in Nova Scotia, beyond the fact that firearms are involved,” he said.

“I wouldn’t do it justice to make that connection for you,” Lucki said.

The questioning comes amid allegations of political interference into ongoing investigations in the days after the tragedy occurred, as the federal government moved ahead with gun control initiatives.

Notes from RCMP Chief Supt. Darren Campbell from the April 28, 2020, meeting released by the commission said Lucki had scolded RCMP staff at the meeting for not publicly disclosing details about the firearms. The notes also said Lucki had made a “promise” to then-public safety minister Bill Blair and the Prime Minister’s Office that the information would be released. The notes said “this was tied to pending gun control legislation.”

Campbell has said that the public release of the gun details would have compromised the ongoing investigations into the killings.

Other senior RCMP members have confirmed Campbell’s account of the meeting.

Nova Scotia RCMP strategic communications director Lia Scanlan said in an April 14, 2021, letter that Lucki “informed us of the pressures and conversation with Minister Blair, which we clearly understood was related to the upcoming passing of the gun legislation.”

Appearing before a July 25 parliamentary committee looking into allegations of political interference, Chief Supt. Chris Leather, director of criminal operations in Nova Scotia, said he “would agree with the statements made concerning the minister, the Prime Minister’s Office, and the impending gun legislation.”

Appearing before the same committee, Lee Bergerman, the former RCMP commanding officer of H Division in Nova Scotia, who has since retired, responded affirmatively when Conservative MP Raquel Dancho asked if Lucki “said that the pressure was from [Blair] and the Prime Minister’s Office” and that it was related to the forthcoming gun policy of the Liberal government.

The federal government has said it did not put pressure on Lucki to reveal information about the firearms.

“At no point did I direct the RCMP in any operational matter, including on public communications. I did not ask them to release any specific information nor did I receive a promise for them to do so,” Blair said at the July 25 committee meeting.

Lucki has said that she wasn’t directed by the government to release the firearms information but that she was asked by Blair’s chief of staff if she would do so.

“Asking questions is not interference,” she said at the July 25 committee meeting. “I can clearly say that I was not interfered with, I was not directed, and I did not cross any line.”

Lucki has confirmed that she did use the word “promise” in the April 28, 2020, meeting but said it was a miscommunication.

“I was trying to convey that I’d already confirmed to the minister that the information about the weapons would be released during the press conference, a confirmation made based on the information I had been provided,” she said.

She added that the “miscommunication” resulted in her providing inaccurate information to her superiors.

“I felt I had misinformed the minister and by extension, the prime minister.”

Blair told the committee on July 25 that his government decided to announce the ban shortly after the mass killing, which left 22 people dead and three injured.