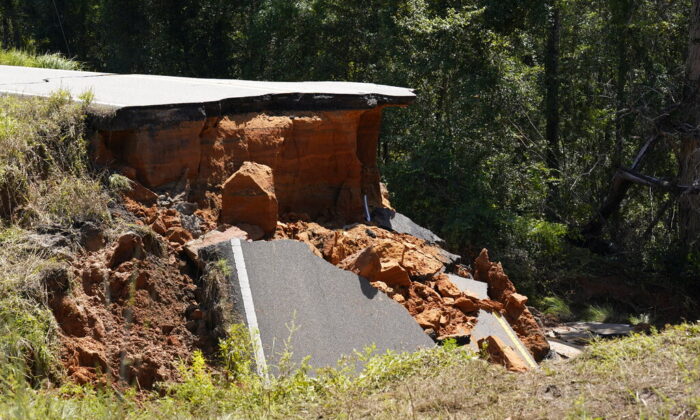 A section of Mississippi Highway 26 is damaged, Two people were killed and at least 10 others were injured when seven vehicles plunged into the deep hole on the dark rural two-lane highway, which collapsed after Hurricane Ida blew through Mississippi, in the Crossroads community, Miss., on Aug. 31, 2021. (AP Photo/Rogelio V. Solis)
US News

LUCEDALE, Miss.—A teenager said she could hear the terrifying sounds of other vehicles crashing around—and on top of—the pickup truck where she and her mother were trapped after the truck plunged into a dark, muddy pit when a Mississippi highway collapsed during torrential rain brought by Hurricane Ida.

“I saw a black hole, then I blacked out and I woke up and my mom was leaned over toward me. She was choking on her blood and she couldn’t breathe or anything,” 16-year-old Emily Williams of Wiggins, Mississippi, told WLOX-TV in a video call from her hospital room.

Williams managed to sit her 39-year-old mother, Amanda Williams, upright and stop her from choking. But, she said, she could still hear the chaos outside her family’s truck.

“I remember hearing a car coming and then I heard a crash and I heard an engine going from a car because it was on top of us,” Emily Williams said. “It didn’t really move us really much, but then I heard the screeching of another car’s tires. I heard people screaming and then it crashed.”

Layla Jamison of Lucedale, a 17-year-old senior at George County High, was in the car that landed on the Williams’ truck. Emily’s aunt, Shanna Bordelon, said Jamison’s car landed without crushing the cab where Emily and Amanda sat.

Emily Williams said waiting in the collapse zone for help was terrifying.

“In all honesty, I was ready to give up,” she said. “I was like, ‘We’re not going to make it out of here. No one is going to find us. Everybody is just going to keep piling in.’”

Emily’s father arrived, and she said once she heard him screaming from above, she knew she would be rescued. She is recovering from a torn colon, a broken leg and other injuries. Still, she said: “I feel so lucky.”

Mississippi Highway Patrol Cpl. Cal Robertson said some of the vehicles ended up stacked on top of each other as they crashed into the abyss, which opened up in an area without street lights. Ida dumped as much as 13 inches (33 centimeters) of rain as it blew through Mississippi, the National Weather Service said.

State troopers, emergency workers and rescue teams responded to the crash site about 60 miles northeast of Biloxi, to find both the east and westbound lanes collapsed. Robertson said the hole removed about 50 to 60 feet of roadway, and was 20 to 30 feet deep.

The vehicles were later lifted out by a crane. A drone video published by the Sun Herald showed how a raised berm beneath the road washed away, leaving a red-clay scar that runs for hundreds of feet, from a cemetery on one side into a wooded area on the other.