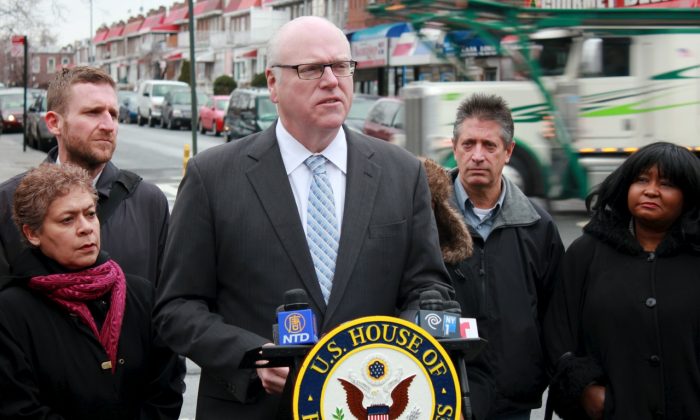 NEW YORK—The city’s dangerous streets have claimed around 50 lives since the start of the year, 30 of which were pedestrians. Mayor Bill de Blasio’s Vision Zero initiative aims to reduce traffic fatalities to zero within ten years, but officials and advocates say more can be done at the state level.

The application for funding currently requires a Strategic Highway Safety Plan (SHSP), but does not require data on injuries and crashes for targeted roads. SHSP is a state-wide plan for reducing accidents on public roads.

“The recent string of traffic related deaths in and around Queens demands our immediate attention to find solutions,” Crowley stated.

In addition to requiring the statistics, Crowley wants to require states to outline how they will address increases of traffic incidents if they occur. Queens experienced 16 traffic-related deaths this year.

“We need to ensure the federal highway safety funds at their disposal are put toward achieving our goal of reducing pedestrian fatalities to zero. It’s time to put an end to the tragedy on our streets,” said Crowley, who has pushed for safe streets in his district by working to create pedestrian plazas, bike lanes, and hosting town halls for safer streets.

Crowley was joined by advocates from Transportation Alternatives and Make Queens Safer.

“For too long, the people of New York City have seen repeated injuries in areas that have been proven to be dangerous and high risk,” said Cristina Furlong of Make Queens Safer. “With the passing of this legislation, New York will be able to provide the resources necessary to transform our dangerous streets.”

The New York Police Department currently releases data on traffic collisions monthly, but has been criticized for failing to fully comply with the city’s open data laws.

NYPD currently does not release the data in machine readable format or log the exact location of crashes, but is working on making system-wide changes to address the gap.

The state and city need closer cooperation to put the mayor’s plan into action. Speed limits and additional speed cameras in the mayor’s Vision Zero plan requires approval at the state level.

Gov. Andrew Cuomo recently denied the city’s request for 160 more speed cameras, though he proposed to add 121 more cameras in Long Island. The final budget did not include additional speed cameras, but Assembly Speaker Sheldon Silver has introduced a bill that would allow more cameras.

Speed cameras, like the city’s red light cameras, are authorized as a part of a pilot program requiring re-authorization every few years. Silver’s bill would allow the speed cameras until 2018.

A city Department of Transportation spokesperson said these re-authorization periods have traditionally been opportunities to add more cameras. The city’s red light cameras are up for re-authorization this year, and bills have been introduced in the Senate and Assembly to increase the number and extend the program.

Data justifies the effectiveness of speed cameras. Just five speed cameras in the city have issued nearly 12,000 tickets since Jan. 16.

The mayor’s Vision Zero plan recommends that the city control these measures.

Correction: An earlier version of the article stated Council member Daniel Dromm’s attendance. The Council member  expressed his support for the legislation in a statement as well, but was not in attendance. Epoch Times regrets this error.