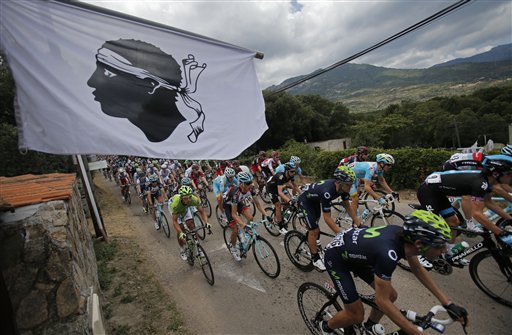 The pack passes a flag featuring a Moor's head, the Corsican emblem, during the first stage of the 100th edition of the Tour de France cycling race over 213 kilometers (133 miles) with start in Porto Vecchio and finish in Bastia, Corsica island, France, Saturday June 29, 2013. (AP Photo/Christophe Ena)
Cycling

A series of errors complicated the finish of the first stage of the 100th running of the Tour de France cycling race.

Marcel Kittel of Argos-Shimano won the stage after most of the top sprinters were wiped out in a crash which might or might not cost a lot of riders a lot of time.

With the riders still 16 km from the finish line, the Orica-GreenEdge tour bus got stuck under the finishing line timing trestle, blocking the road and dislodging the electronic timing system.

With the riders only eight kilometers away, it seemed the bus wouldn’t be moved in time. Tour organizers moved the finish line back three kilometers. Suddenly riders who were relaxing before the final run-in found themselves needing to set up for sprint.

The confusion caused by this sudden change in strategy caused chaos in the peloton. As riders scrambled to find their team mates to form up for the finish, riders touched wheels, setting off a chain of collisions which claimed two dozen riders, including some of the favorites, Peter Sagan, Mark Cavendish. The crash also claimed Omega Pharma-Quickstep’s Tony Martin, and Saxo-Tinkoff’s Alberto Contador.

As the riders picked themselves up off the road, the Orica bus dislodged itself from the timing trestle. Tour organizers, seeing riders all over the road, decided to revert to the original finish line. This gave the teams a second chance to contest the win.

Sprinters Andre Greipel of Lotto-Belisol suffered a mechanical failure, losing his shifters somewhere between the provisional and original finish line

The thinned field proceeded on another three kilometers, and whichever teams had members up and running, set up for a second sprint.

Orica-GreenEdge sprinter Matt Goss, who had survived the first pileup, crashed on the final corner before the finish line.

Argos-Shimano was one of the few teams which had its leadout riders and sprinter; the Argos train got Kittel close, then the Argos sprinter hooked onto the wheel of a Lotto rider. On the right, Katusha’s Alexander Kristoff was following an Omega rider. Kristoff started his sprint first and looked to have the stage win, but Kittel came on late and caught him in the final several meters, winning the stage and the yellow jersey.

Because the Orica bus damaged the timing equipment, and because of the confusion created by the moving finish line, Tour organizers decided to give all riders the same time, so no one will be penalized no matter if they got caught in a crash or had mechanicals.

The toll taken will be bruised bones and scraped skin. Tony Martin is out of the race with a broken collarbone. No word yet on Peter Sagan or Alberto Contador, or whether other riders were injured.