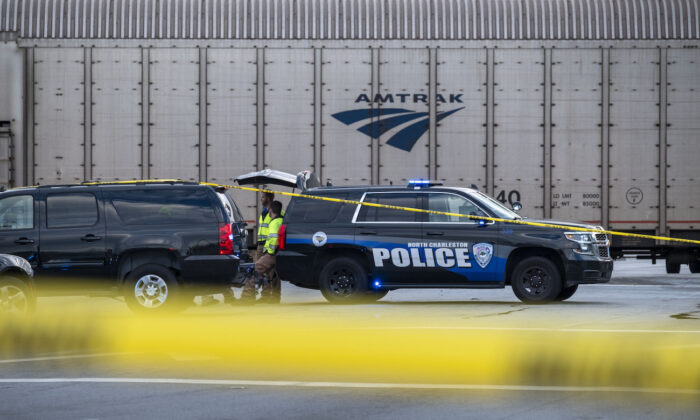 Police work the scene of an early morning collision between a vehicle and a train on Remount Road in North Charleston, S.C. on Oct. 30, 2021. (Matthew Fortner/The Post And Courier via AP)
Crime and Incidents

3 Dead After Amtrak Train Collides With Vehicle in South Carolina

Three people are dead after an Amtrak train collided with a vehicle at a rail crossing in South Carolina, authorities said.

The North Charleston Fire Department said that the collision was first reported to emergency dispatchers shortly before 2:30 a.m.

The three people who were killed were pronounced dead at the scene and were among the four occupants of the SUV that was struck by the train. The fourth person was taken to a hospital.

An Amtrak spokesperson said in an emailed statement that Auto Train 53 was traveling from Lorton, Virginia to Sanford, Florida.

The train, which had 474 passengers in 12 of its cars, made a controlled emergency stop after colliding with the SUV, the spokesperson said, adding that none of the passengers or crew were injured.

Amtrak representatives are assessing damage to the train.

The North Charleston Police Department and CSX Transportation are investigating the cause of the crash.