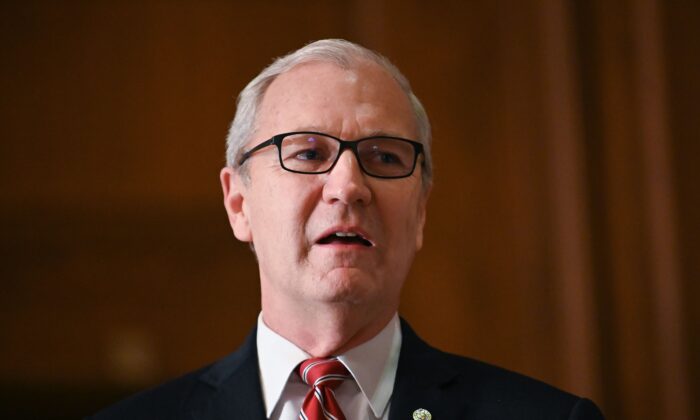 Sen. Kevin Cramer (R-N.D.) speaks to reporters on Capitol Hill in Washington on Oct. 1, 2020. (Erin Scott/Pool/AFP via Getty Images)
US

Senate approval of the House-passed Respect for Marriage Act that codifies same-sex unions the Supreme Court recognized in 2015 will seriously weaken freedom of religious expression and practice across America, according to Sen. Kevin Cramer (R-N.D.) and civil liberties advocates.

The bill also repeals the Defense of Marriage Act of 1996, with its federal definition of marriage as between one man and one woman, and redefines marriage for all levels of government in the United States as a union of any two or more individuals.

Cramer and civil liberties advocates who defend traditional marriage worry the Schumer bill will open the way to imposing secular values at the expense of faith-based principles in multiple sectors of American life.

“Let’s take a faith-based college or university whose students apply for admission based on Christian values, Christian principles, or Judeo-Christian, or even Muslims for that matter, and then they are told, oh by the way, you can’t get a Pell Grant or a federal student loan to attend that university,” Cramer told The Epoch Times.

The students will be told that “because not only does the university not allow faculty members that may be involved in a marriage we don’t support, or they actually speak out against them. This is, in my view, a practical consequence,” Cramer said.

“All of these are things that reduce the burdens on taxpayers and provide services in direct competition with the government, but they provide them in a compassionate way—it’s the same heart,” Cramer added.

Sen. James Lankford (R-Okla.) told The Epoch Times that “people of all faiths and opinions must be respected and protected as Americans. Congress should never pass a bill that does not guarantee the full rights of religious freedom afforded to all Americans under the Constitution and laws of this nation.”

But he warned that the Biden administration already uses the power of government to cut off funding and program benefits to any entity that does not agree with their liberal policies. Religious liberty means faith-based organizations and individuals have equal rights to every government benefit or program, even when they do not agree with the president.”

Passage of the controversial measure is far from guaranteed.

Senate Majority Leader Chuck Schumer (D-N.Y) promised on Sept. 7 that the Senate will vote “in the coming weeks” on the bill that was approved on July 19 by the House, with the support of all Democrats and 47 Republicans, including National Republican Congressional Committee Chairman Tom Emmer (R-Minn.) and House Republican Conference Chair Elise Stefanik (R-N.Y.).

Passage in the Senate, however, requires 60 votes, meaning the bill must gain support from all 50 Democrats and Independents, plus 10 of the 50 Republicans. While Portman and Collins are pushing for passage and others are expected to do so as well, it’s far from certain that 10 Republican senators will vote for the Schumer-backed measure.

Schumer had previously talked of linking the same-sex marriage bill with an expected “must-pass” Continuing Resolution (CR) on federal spending that will be needed by the end of the current fiscal year on Sept. 30 to keep the federal government open.

But Heritage Action Vice President Garrett Bess told The Epoch Times on Sept. 9 that he thinks the decision to de-link the two measures “gives us all the information we need to know about why Schumer wants this vote in the first place and that is that he’s not really trying to achieve some sort of law-making outcome on this issue, he really just wants it as a political wedge.”

Bess said Schumer “knows that he doesn’t necessarily have the Republican votes to pass it but he doesn’t want to be the one to shut the government down at the end of September.”

“One of the most dangerous provisions of the bill is the private right of action. That provision would empower activist groups to drag faith-based organizations into court over the organizations’ beliefs on marriage. Any organization that receives a federal contract, license, or funding will be vulnerable,” Dulin told The Epoch Times.

“Thousands of faith-based adoption agencies, women’s shelters, and soup kitchens across the nation could face costly lawsuits simply because they want to operate according to the religious beliefs they have always held. This provision makes the bill a Pandora’s Box that, once opened, could unleash activist attacks against faith-based organizations nationwide,” she said.

“The bill does much more than simply codify [Obergefell v. Hodges]. First, it requires everyone acting under ‘color of state law’ to give full faith and credit to same-sex marriages,” Baylor told The Epoch Times. “One example can be a faith-based adoption and foster placement agency that works with the government. The concern we have is that these faith-based social service organizations will be subject to this requirement that they recognize same-sex marriage.”

Second, Baylor pointed out that the previous law, the Defense of Marriage Act, told states they did not have to recognize other states’ same-sex marriages and it defined for federal purposes marriage in traditional terms.

“What the Respect for Marriage Act does is it repeals both of those and replaces them. Instead of giving states the freedom to not recognize same-sex marriages, it requires not just states but also anybody acting under color of state law,” Baylor explained.

Baylor further noted that, while the Schumer-backed bill does not redefine marriage for federal purposes, it does require the government in Washington to recognize whatever marriages are recognized by state authorities.

“Now that includes same-sex marriage, but it’s already true under Obergefell that the federal government has to recognize same-sex marriage. So what other kinds of marriages might we be talking about? Polygamous marriages,” Baylor said.

Baylor is also director of the Arizona-based ADF’s Center for Religious Schools and Senior Counsel for Government Affairs.

Jonathan Alexandre, senior counsel for Liberty Counsel Action, told The Epoch Times the redefinition of marriage by the Respect for Marriage Act also goes beyond polygamy to include relationships involving minors.

“Fundamentally, it restructures anything we understand marriage to be, to include marriage by more than two individuals and of any age. Where marriage was recognized before Obergefell as one man and one woman, now that is no longer the standard and this law will come in and force recognition of multiple individuals as well as marriages that include individuals that are of minority age,” Alexandre said.