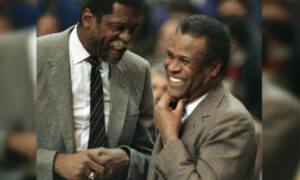 Craig Sager is set to return to the sidelines on March 5, and fans are wondering about his wife Stacy and his five children.

Stacy is originally from Arlington Heights, Illinois and is a former Bulls dancer. She met Craig while he was reporting on Bulls games. Stacy earned a Bachelor’s in Biology from the University of Illinois at Chicago before working in sales for several health companies.

She spends much of her time being a mother now, but is also listed on her LinkedIn as the owner of Fairway and Fantasy Vacations, which provides vacation rentals in Reunion Resort & Club. She also co-owns Jocks & Jills Sports Grill in Atlanta with her husband.

Sager also has three other children from a previous marriage, including his best known child, Craig Sager Jr.

Sager’s son underwent a series of tests to determine whether he could be a match for a bone marrow transplant that his father needed after he was diagnosed with leukemia, and ended up being that match. Craig Jr. also became better known wen he was the one who announced his father’s diagnosis.

“We’re so lucky it was me,” Craig Jr. told Bleacher Report. “We could do it fast. And to be able to help my dad like that is a feeling that I can’t describe. To see how badly he needed it and to see him come back. He started to turn a corner pretty fast after the transplant. It’s amazing.”

Sager Jr.’s profile also increased when he did an interview with San Antonio Spurs coach Gregg Popovich in the playoffs last season, as his father watched from his hospital room and shed tears.

“Oh, my God. They didn’t tell me he was doing it and I was in the hospital watching every game and all of a sudden I hear that Craig Jr. is going to be interviewing,” Craig Sr. told the Atlanta Journal Constitution.

“I was shocked when he did the interview with Popovich. I had tears running down my cheeks.”

“My entire life, I wondered what it was like to be him for a day,” Craig Jr. said. “I could never replace him.”

But Craig Jr. is content in his job, managing editor for Score Atlanta, which covers high school sports across Georgia.