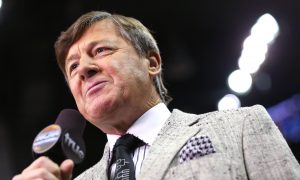 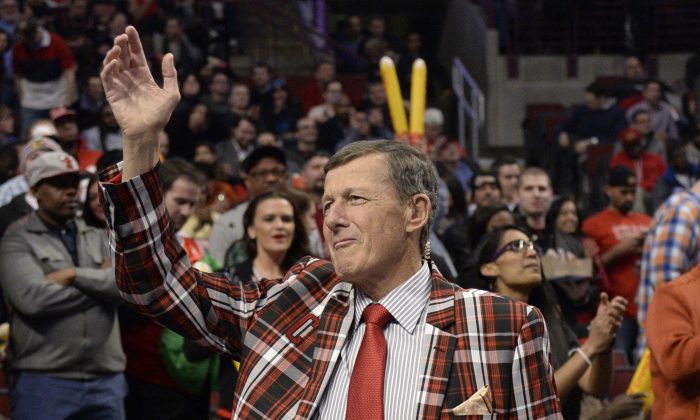 Craig Sager acknowledges the crowd during a timeout in an NBA basketball game between the Chicago Bulls and the Oklahoma City Thunder in Chicago. (AP Photo/David Banks)
NBA

The company Patti Lapel created a pin depicting NBA sideline reporter Craig Sager and Gregg Popovich, the Spurs coach who is known for his curmudgeonly sideline interviews. Sager recently revealed his cancer was no longer in remission.

The pin sells for $10 with 15 percent to be donated for cancer research.

Sager originally announced he was diagnosed with leukemia in April of 2014. The cancer soon went into remission and Sager returned to his work covering the NBA in March of 2015.

Craig Sager: TNT and TBS Sideline Reporter Says His Cancer Is No Longer in Remission

But the cancer returned just weeks later, only to go into remission again by the fall of 2015. Sager then announced on HBO’s Real Sports that doctors told him in February that the cancer was no longer in remission.

New @FriendlyBounce: You can own a pin of Gregg Popovich and Craig Sager https://t.co/89xFhmbUdh by @Matt_Cianfrone

During the interview Sager admits he has a tough road ahead.

“I’ve already had two stem-cell transplants. Very rarely does somebody have a third,” the popular Sager says in the interview. “So I have to maintain my strength, so I can go through this.”

Winner: Popovich by a million pic.twitter.com/vxLJBcPtYR

Meanwhile, Sager’s relationship with Popovich—particularly their sideline interviews—are top-notch entertainment. The old-school Popovich has never seemed to enjoy them, but in recent times seems to embrace his back-and-forth banter with his good friend Sager.