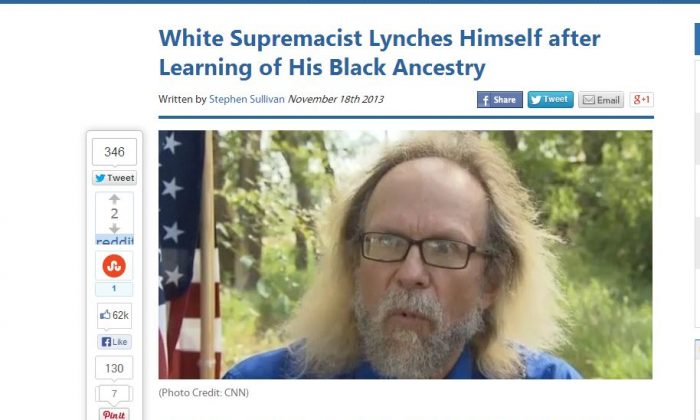 A viral “news report” has been been circulated across social media sites saying that white supremacist Craig Cobb is dead via suicide after he was told that he is 14 percent black.

The report, circulated by satire news site Newslo.com, claims Cobb “decided to ‘end the humiliation’ by lynching himself, according to members in attendance” at the “Trisha Goddard Show.”

According to its disclaimer, Newslo “is the first hybrid News/Satire platform on the web. Readers come to us for a unique brand of entertainment and information that is enhanced by features like our fact-button, which allows readers to find what is fact and what is satire.”

The part about Cobb killing himself live on television is fake. Other parts of the story, however, are true.

On the article, a number of commenters appeared to believe it. Some media sites also reported on it and blogs republished it.

No mainstream media entities have reported on Cobb hanging himself.

However, on the “Trisha Goddard Show” last week, Cobb was told that he is 14 percent black, which actually did happen.

Cobb has made headlines recently for trying to start a white supremacist enclave in Leith, North Dakota. Cobb has purchased a large amount of property in the town to further his goals

He was arrested this week for allegedly terrorizing residents of Leith with a rifle.