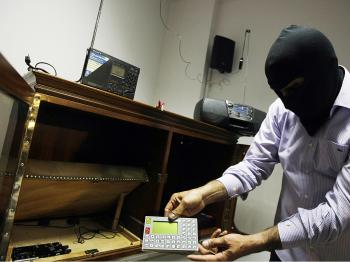 By Charlie Ghanem
biggersmaller
Print
BEIRUT, Lebanon—Lebanese Security Forces arrested a municipal official over the weekend in central Bekaa, a district in the east of the country, suspecting he was spying for Israel.

The suspect, Ziad Homsi, is the deputy mayor of Saadnayel municipality. He was reported by local media to be the media coordinator of the main Sunni political party, the Future Movement, though the latter has denied any official relations with Homsi.

"The truth is that Mr. Homsi is publisher of one of the local magazines [in Bekaa] and thus has contacts with all electoral campaigns in the region,” the Future Movement said in a statement.

To protest the arrest, local citizens and Homsi’s relatives and friends demonstrated on the Beirut-Damascus highway, threatening to block it.

Homsi is one of several suspects detained recently under suspicion of spying for Israel. Ever since a spy ring headed by a former Lebanese general was arrested, the number of arrests has been increasing rapidly.

Thirteen people in all have been formally charged with spying for Israel, including four suspects currently in custody. These include Lebanese high ranking officials, their family members, policemen, and civilians. Some have been working for Israel for more than 15 years.

As Lebanon is in a state of war with Israel, some could face a 10-year prison sentence or the death penalty. It depends on the nature of the spy operation, which ranges from visiting the Jewish state to supplying it with information.

A local bakery owner in Ashrafieh, Beirut, spoke to The Epoch Times about a spy who fled before security forces stormed his house.

“He had an old green Mercedes and we saw him hanging around in the neighborhood all the time for years; we thought he had no job. However, he had a lot of cash because every time he reached into his pockets, he took out hundreds of dollars,” said the baker.

“We just knew that he fled to Israel with his oldest son as they were both spies, while his younger son, who is in the army, was interrogated but was released as he knew nothing about the issue.”

While the different political parties in Lebanon are busy with the parliamentary elections due on June 7, despite their political differences and conflicts, they are all praising the job done by the security forces concerning the arrests.