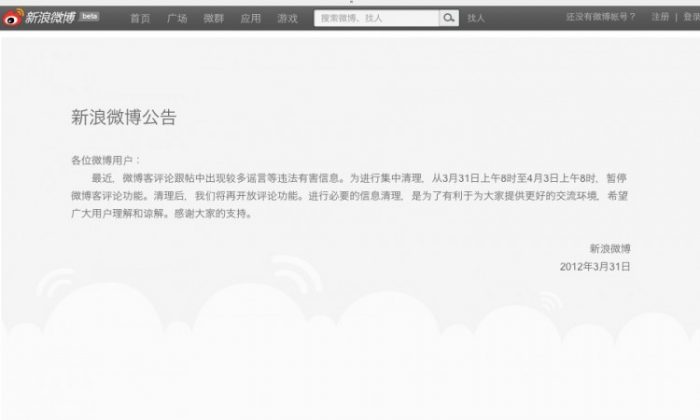 Screenshot of the weibo.com page that appears when a user attempts to post a comment. The message says that commenting is disabled from 8 a.m. March 31 to 8 a.m. April 3, and will be enabled "after cleaning up."
China

An icy breeze has swept across the Chinese Internet after a brief period of relaxed restrictions, with the authorities reportedly arresting over 1,000 netizens, blocking a dozen social websites, and jacking up restrictions on popular microblogging platforms amidst continued political uncertainty in China.

According to an initial announcement by Xinhua, the mouthpiece of the Chinese Communist Party (CCP), authorities arrested 1,065 individuals and purged over 208,000 “harmful” messages online. That news item was itself later removed from Xinhua website.

Those rumors, unsubstantiated, spread online rapidly in China and were reported on overseas early last week, at one stage making the cost of insuring Chinese government debt slightly more expensive. A spokesperson for the Party’s foreign propaganda office said that “some lawless people” had fabricated the rumors and the websites were being punished for not preventing their spread.

The later report said it was an “undisclosed number” that had been arrested and “shown intention to repent.”

Major web portals weibo.com and t.qq.com, the microblog platforms of Internet giants Sina and Tencent respectively, were “criticized and punished,” the propaganda official said, according to Xinhua.

A notice on Sina Weibo alerted users that “a lot of rumors and illegal, harmful information” had recently been spread and that in order to carry out “centralization and clean up” the comment function would be disabled from 8 a.m. on March 31 local time until 8 a.m. on April 4.

Last week a number of Internet search terms related to the Tiananmen Square massacre, Falun Gong, and Wang Lijun’s involvement in live organ harvesting were all allowed to be searched on China’s dominant search engine Baidu and in some cases on Sina Weibo. Analysts speculated that enabling these searches may have been ways for Party figures like Wen Jiabao to undermine the faction associated with former regime leader Jiang Zemin, including Bo Xilai, the recently dismissed official, and Zhou Yongkang, who controls all of China’s internal security forces.

Analysts have been divided on what could have triggered the recent switch. One line of speculation is that Zhou Yongkang and Bo Xilai are gaining the upper hand in the current political battle, and lashing out at their enemies.

Supporters of Bo were given a hard time last week, according to reports. After Bo’s dismissal, Kong Qingdong, a known supporter of the regime and self-identified “leftist,” began to loudly back Bo and the “Chongqing model” of governance. He characterized Bo’s firing as an “anti-revolutionary coup,” a charged term that dates back to the Chinese civil war.

Kong reportedly got into trouble for this support. According to Deutsche Welle, after Kong’s March 24 video was deleted he disappeared for several days. Later he came online and wrote that his freedom had been “restricted” by State Security officers as he was being investigated for taking one million yuan (US$159,000) from Bo Xilai to propagandize the “Chongqing model.” Kong wrote on Weibo that he gave the money back, according to Deutsche Welle. After that note was widely forwarded, it too was deleted, the report said.

With the recent arrests and website shutdowns and restrictions, hardliners may be trying to fight back.

Boxun, an overseas Chinese democracy website that has been the leading source of rumors—a number of them later proven to be remarkably accurate—on the Wang Lijun and Bo Xilai scandal, quoted a senior personnel at the Communist Party ideological magazine Seeking Truth.

The official said that after Bo was stripped of his post, the secretary of “a certain high-level official” called together a number of well-known media figures, including Kong Qingdong and Sima Nan, and asked them to start supporting Bo Xilai. The secretary reportedly said that Bo “absolutely won’t collapse” and the support in Party Central for Bo is still “especially strong,” except from his foe Wen Jiabao. Sima Nan is a public commentator in China thought to work in league with some officials.

The Seeking Truth editor told Boxun, the website reported, that he personally saw Sima Nan at the meeting. Sima was reportedly afraid for his personal safety, annoyed with restrictions to his Internet expression, and was prepared to leave China to join his family in the United States if circumstances deteriorated.

The article continued that “a certain high-level official” assured Sima Nan of his safety and vowed to “investigate and strictly punish” problematic netizens. In later discussions of the article, commentators widely suspected that the official referred to was Zhou Yongkang.

On Baidu, it is still possible to search for “Wang Lijun live harvest” and be greeted with an article, as first result, about the U.S. Congress calling for an investigation of what information Wang may have leaked to the consulate in Chengdu, where he attempted to defect on Feb. 6. Wang was involved in live organ harvesting, probably including from Falun Gong practitioners, when he was a police chief and protege to Bo Xilai in Liaoning Province. The unusual exception to a strict regime of censorship was noted several days ago.