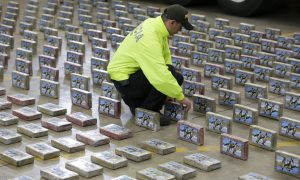 Over 7.5 Tonnes of Cocaine Seized in Colombia-US Joint Operation
0
Americas

The silver “last spike” that symbolized the completion of the Canadian Pacific Railway in 1885 has been acquired by the Canadian Museum of Civilization in Ottawa.

The historic artifact was donated to the museum by heirs of William Van Horne, the legendary American railway executive who led the building of the railroad, which united Canada from sea to sea.

“The completion of Canada’s first transcontinental railway is one of the most significant and famous events in our country’s history,” Mark O’Neill, president and CEO of the Canadian Museum of Civilization Corporation, said in a press release.

“The ceremonial ‘last spike’ is an extraordinary artifact that will help us tell this story to future generations. We are very grateful for this generous donation.”

But in fact, the silver spike was not the last spike, as then-Governor General Lord Lansdowne, who was supposed to hammer it into the track during the “last spike” ceremony at Craigellachie in British Columbia, had to return to Ottawa before the event took place.

So in his place, CPR director Donald Alexander Smith hammered in an iron spike—one that was indistinguishable from the countless others that had been pounded into place over the previous four years.

Lord Lansdowne later had the silver spike mounted on a stone base and sent as a gift to Van Horne. It has remained with the Van Horne family for the past 125 years.

The building of the CPR was integral to Canada’s political and economic development. The promise of a rail link with central Canada helped bring B.C. into Confederation, while the railroad opened the Prairies to settlement and large-scale grain production, giving rise to towns and cities across the West.

Lord Lansdowne later had the silver spike mounted on a stone base and sent as a gift to Van Horne.

“Sir William Van Horne was passionate about Canada and proud of his contribution to its development,” said Sally Hannon, a member of the donor family.

“I believe he would be delighted to know that this symbol of his greatest achievement will have a permanent home in Canada’s national museum of human history.”

As for Smith’s efforts to hammer in the iron “last spike” in place of the silver one, he bent it with a poor swing of the maul. It was removed and he hammered in another one, getting it right the second time around.

Smith kept the bent spike and later had part of it fashioned into jewellery for the wives of CPR directors. The remainder is displayed at the Canada Science and Technology Museum in Ottawa.

The second “last spike” was removed (to discourage souvenir hunters) and reportedly given to the son of the CPR’s patent office president. It is said to be still in that family’s possession, reshaped into a carving knife.

The silver spike was unveiled last week at the CPR Pavilion in Calgary, and following its premiere there will be moved to the Canadian Museum of Civilization.