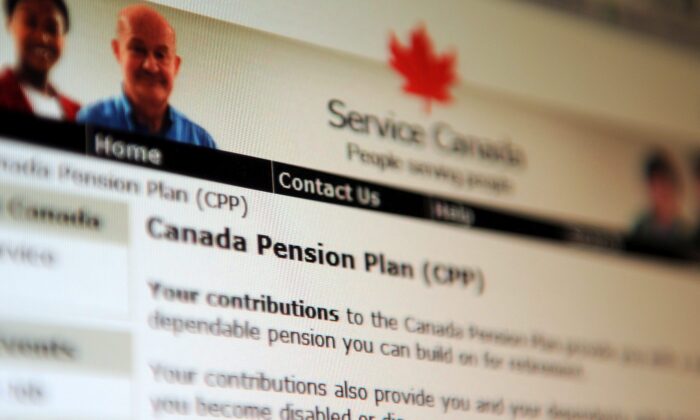 Information about the Canada Pension Plan is displayed on Service Canada’s website in this file photo. (The Canadian Press/Sean Kilpatrick)
Viewpoints

Happy New Tax Increase. The planned hike in Canada Pension Plan and employment insurance premiums has not merely gone ahead, it has gone up, because the toil of citizens is insufficient to satisfy the needs of the state. Something is upside down here.

In my 2016 documentary “True, Strong and Free” on fixing the Constitution, whose key recommendations have unaccountably not yet been implemented, I observed that historically Canada “has always been a land where the government could be small because the citizens were big.” But, I warned, the state had gone some considerable distance from being a servant of the people toward being their master.

This process has been dramatically illustrated in the COVID crisis, in which the main driver of lockdown was the health not of the public but of the public medical system. And as usual, the institutional and “practical” problem is fundamentally intellectual. The basic idea of things like the CPP is that Canadians are not capable of planning for their own retirement, just as socialized medicine is driven by a belief that we cannot provide for our own medical care, or that of the less fortunate, through private means including private charity.

The justification might be that we are feckless, that we are at the mercy of cruel private economic forces whose strength far exceeds their own, or both. But regardless, governments must provide for us if we are not to end up eating cat food and burning the furniture for warmth in penurious and undignified old age, a prospect so horrifying that no sacrifice is too large to avoid it.

Thus The Canadian Press reported that “Come Jan. 1, Canada Pension Plan contributions are going up again, although higher than originally planned. The reason is largely because of the pandemic’s effect on the labour market…” On, if you look closely, Dec. 30, 2020. Yes, that’s right. It happened a year ago. And it didn’t work, so they’re doing it again.

This year the National Post tells us, “As of January 1, premiums for Canada Pension Plan will be hiked higher than usual. Employment Insurance premiums are also on the rise. In the case of CPP, maximum contributions by employees and employers will be $3,499.80 in 2022, up from $3,166. For self-employed Canadians, the maximum amount will be $6,999, up from $6,332.”

If you’re counting, that’s a 10 percent increase this year alone. Which seems like a lot. Imagine if it happened every year. But if it must, to keep government solvent so it can save us, it will.

In arguing for keeping Ontario schools open in January, Ontario’s Chief Medical Officer of Health Kieran Moore, blurted out last week, “Our children have sacrificed a lot in the past 20 months.” Which is revealing because to hear the politicians tell it, the lockdowns were all about protecting kids. But apparently they were actually paying the price for someone else’s well-being. And not that of their parents. Someone in the public sector, whether teachers, administrators, or providers of socialized medicine. As usual.

Government, after all, has a lot on its plate, because of the presumption that any significant problem in Canada including excessive salt consumption arises in the private sector, again from the weakness of individual citizens, the potent malice of Big Food or both, and the only conceivable solution is to increase the power of government. Ditto bad weather, intolerance, and anything else you can name. Including a sluggish economy.

There are some backward folks who feel that the state is not a cornucopia. In his sparkling 1850 monograph “The Law,” Frederic Bastiat used a different metaphor that, alas, cannot be reproduced today, to warn that any resources the state acquires are taken from the private sector, not created from nothingness. But, he adds, “Socialism… confuses the distinction between government and society. As a result of this, every time we object to a thing being done by government, the socialists conclude that we object to its being done at all. We disapprove of state education. Then the socialists say that we are opposed to any education. We object to a state religion. Then the socialists say that we want no religion at all. We object to a state-enforced equality. Then they say that we are against equality. And so on, and so on. It is as if the socialists were to accuse us of not wanting persons to eat because we do not want the state to raise grain.”

If you doubt that we are all socialists today, try objecting to agricultural marketing boards. Or state schools. Or hate speech laws. Or government pension levies that crush our capacity to save privately in order to rescue us from our failure to save privately.

Meanwhile, you can save that news story. You’ll need it again next January.