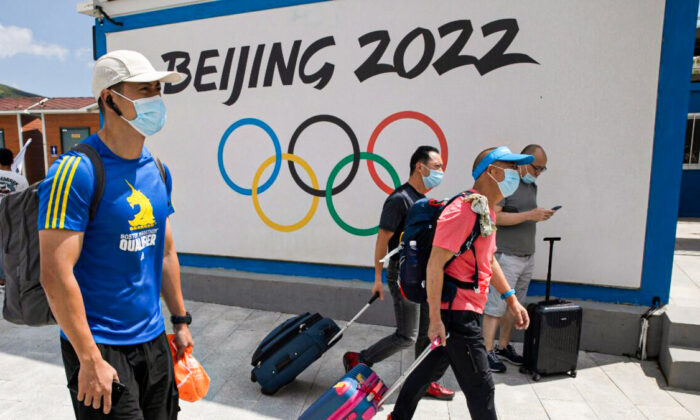 Visitors to Chongli, one of the venues for the Beijing 2022 Winter Olympics, pass by the Olympics logo in Chongli in Hebei Province, China, on Aug. 13, 2020. (Ng Han Guan/AP Photo)
Chinese Regime

In preparing journalists for going to Beijing for the 2022 Winter Olympics, the Committee to Protect Journalists (CPJ) issued safety advice to help journalists better guard themselves against the surveillance of the regime.

China remains the world’s worst jailer of journalists for the third year in a row, with 50 behind bars, as the CPJ revealed. Both Chinese and international journalists are facing ever-stricter censorship and control.

Earlier, the CPJ expressed its concern that China’s mistreatment of journalists has steadily worsened since 2008. CPJ summarized that China’s Olympic press freedom pledges were “worthless in 2008,” and “absent in 2022.”

Citing the Foreign Correspondents Club of China (FCCC) Statement on Olympic Coverage, CPJ indicated that foreign journalists reporting conditions in the run-up to, and during, the Games are denied because journalists are required “to submit COVID test results within an impossible timeframe of only a few hours.”

“In March 2021, the FCCC said 20 international journalists had been expelled in the preceding year, while reporters are frequently followed and interviewees scared to engage,” reported CPJ.

CPJ advised journalists traveling to Beijing to assume the devices and online activity are monitored at all times. It also recommends journalists leave devices at home or wipe data from the devices beforehand, create a new email for the trip, and wipe the devices again on their return. They should assume their hotel room is under surveillance, the CPJ said.

CPJ particularly warned about the use of the Chinese communication app WeChat because it could collect a large amount of data, including messages and calls.

In addition, CPJ warned that wiping or factory resetting all phones and computers will not guarantee to erase all malware, “so stop using them altogether if you can.”

The Belgian Olympic and Interfederal Committee also recently advised athletes not to bring their mobile phones and laptops in order to avoid having them be exposed to cyber espionage during the Beijing Winter Olympics.

The Chinese embassy in Belgium responded to the comment in a press conference on Jan. 12 saying that the claim regarding “risk of cyber-espionage is completely unfounded and the worries are unnecessary.”