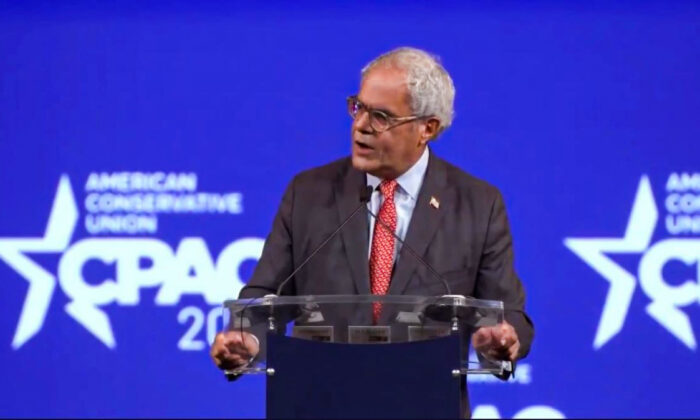 Fresh on the heels of last week’s Conservative Political Action Conference in Florida, Charlie Gerow, vice chairman of the American Conservative Union which hosts CPAC, talked with The Epoch Times about values, policies, and his campaign for Pennsylvanian Governor.

“That matters now as never before. We were always told that eternal vigilance was the price of our liberty, and we have reason to be especially vigilant right now with the Biden administration, [Pennsylvania Gov.] Tom Wolf, and others trying, on a daily basis, to strip our liberties away,” Gerow told The Epoch Times. “The values that I’ve promoted and espoused for years are the values of most Pennsylvanians. They want to see those values implemented through public policy on a consistent basis.”

The harsh pandemic mitigation measures implemented in Pennsylvania by the Wolf administration were bad public policy, Gerow said, because they overlooked the essential values of liberty and individual decision making, and have had a significant impact on individual lives.

Wolf’s values, big spending and big taxing, have left a mark on Pennsylvanians, Gerow added, and have hurt our society, economy, and job creation. In addition to his different view on what would be the best economic policies for the state, Gerow also pointed to a difference in values that see him prioritize the human right to be born.

“Where there was a cry for unlimited access to abortion, the number of abortions dramatically increased, to the point where now, across the country, we have more than 60 million aborted babies since Roe vs. Wade. That’s another place where policy and values have to meet,” he said.

Pro-life Gerow, 66, was born in a Brazilian slum to an impoverished single mother who gave her son to American missionaries with the hope that he would grow up in the United States and learn how to read. They adopted him and raised him in Pennsylvania where he grew up to attend Villanova Law School, work with President Ronald Reagan, and own a business, Quantum Communications. He is now devoting all his time to his election campaign.

“I believe it’s fundamentally wrong for politicians to try to move up, while jobs and people are moving out of the state,” Gerow said. “Taking a taxpayer check while you’re running around the state running for governor is, in my judgment, an insult to the taxpayers. Josh Shapiro has done this consistently throughout his career. And yes, I do believe that that same problem extends to some of my Republican friends, but that’s an issue for which they’ll have to answer to the voters.”

As Pennsylvania’s Attorney General, Shapiro, earns $177,237 annually. He is the only Democrat running for governor. Republican gubernatorial candidates currently employed by the state are senators Jake Corman, who earns $148,978, and Doug Mastriano who earns $95,432.

Energy Gold Mine Under Our Feet

Gerow says he coined the phrase “gold mine under our feet,” which a lot of candidates are now using on the campaign trail.

“We have literally trillions of cubic feet of natural gas underneath Pennsylvania soil. Not just the Marcellus Shale, about which a lot of people talk, but the Utica shale underneath that, and yet another level underneath that—hundreds of years potentially of life-sustaining natural gas,” Gerow said.

“I’ve been a proponent of the safe and responsible development of natural gas. I believe it’s a gift from God that we ought to use wisely and responsibly, and so I’ve promoted it from day one. In fact, long before people were talking about the Marcellus Shale, I was writing and speaking around the state in favor of the job creation, the cost savings, the energy independence, and ultimately the national security that our natural gas resources provide.”

As governor, Gerow says he would remove Pennsylvania from the Regional Greenhouse Gas Initiative (RGGI), a cap-and-trade program that will raise consumer energy costs. He believes Pennsylvania entered RGGI improperly.

As the new Shell Chemicals’ ethane cracker plant for plastics production nears completion in Beaver County, it hires around 8,000 daily construction workers. When done, the plant will produce products ranging from automotive parts to food packaging, and will require about 600 permanent on-site workers, according to Business Journal Daily. Gerow says Pennsylvania has room for a few more such facilities.

“I would aggressively go after the opportunity to have those in Pennsylvania and all of the benefits those types of facilities would bring,” he told The Epoch Times.

When it comes to state agencies, Gerow would make some changes, including at the Department of State.

He would look at reducing the size of the Department of Environmental Protection, where he says the bureaucrats drag their heels on virtually everything and overstep regulations too often.

And, Gerow says, he would reform the Department of Education. He has heard many complaints from voters that the schools are not doing for students what they’re supposed to be doing.

“We are in a battle for the heart and soul of our country, and I know that we cannot lose that fight, and those battle lines run right through Pennsylvania this year. We can choose to get away from the big government, lockdowns, shutdowns, mandates, edicts, and arbitrary and capricious rules of Tom Wolf and Josh Shapiro, and choose a path of liberty, individual freedom, economic growth, prosperity, and hope, and that’s why I’m running,” he said.