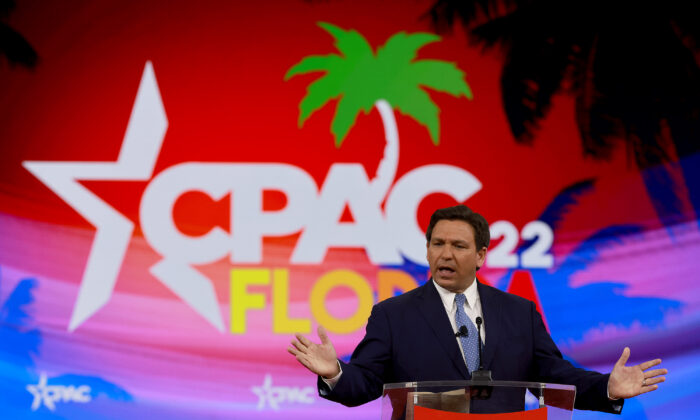 CPAC Crowd Applauds Being ‘Awake, Not Woke’ in Orlando

For nearly 12 hours, lovers of all things conservative cheered their way through speeches and panel discussions Feb. 24 at the sprawling Rosen Shingle Creek resort in Orlando.

They wrapped up a day of applauding fiery monologues at the Conservative Political Action Conference, better known as CPAC, by nibbling finger foods at the event’s official welcome reception.

There, in the middle of a sea of booths selling or promoting a range of conservative gear and topics, MyPillow maven Mike Lindell railed from an elevated platform. He was surrounded by a crowd of people holding up phones to record his passionate testimony about Jan. 6-related events and injustices.

With day one behind them, fired-up conservatives streamed out, ready to return in the morning for another day of cheerleading for the Right’s leaders and politicians.

Day two’s highlights include promised appearances by South Dakota Gov. Kristi Noem, Brexit Party leader Nigel Farage, and U.S. Senator Marco Rubio (R-Fla.), who, as yet, has not officially registered as a candidate for reelection in November.

Though a mixed field of 12 Democrats, Republicans, and others already have announced their candidacy to claim the seat Rubio holds, political insiders don’t doubt he will run.

People in the clique of Florida politics predict a heated race will arise between Rubio and Democrat Congresswoman, Val Demings. Demings also has delayed officially filing paperwork to run, but maintains a website that blasts the fund-raising plea, “Every dollar counts in the fight to defeat Marco Rubio.”

“Rubio went through this dance six years ago—‘No, I’m not gonna run. No, I’m definitely out of politics. I’ve had all I can take,’” recalled political analyst Peter Bergerson, Ph.D., of Florida Gulf Coast University.

“Then, of course, he was convinced or the majority leader [U.S. Senator Mitch] McConnell talked him into running for re-election, and he won handily.”

Often, Bergerson noted, holding off on officially registering to run is a strategic move, often centered on how soon a candidate wants to disclose information about contributions. Financial report filings are a routine and required part of the process once the documentation needed to announce as a candidate has been officially filed.

On day two of CPAC, participants had much to chat about as they headed back to the convention space.

The first day of the four-day event brought to the stage a stream of Republican Party stars, including Florida’s governor Ron DeSantis, Rubio, and Missouri’s Senator Josh Hawley.

Thunderous applause and wild cheers, maybe the biggest of the day, greeted DeSantis, 43, who tossed ball caps into the crowd before beginning a short speech. He touted Florida’s success, breaking tourism records in 2021, and he poked fun at big-name Democrats who visited from their own locked-down locales.

“They escaped to freedom in the state of Florida,” he announced to cheers. “And why do even these biggest critics and lock-downers come to Florida? Well, I think it’s simple. From the very beginning, we refused to let this state descend into some type of Fauci-an dystopia where people’s freedoms—and their livelihoods are destroyed.

Through applause, he mentioned his moves to successfully ban vaccine passports and mandates.

“So we stood for freedom across the board, and the result has been Florida has defeated Fauci-ism. Freedom has prevailed in the Sunshine State.”

Though his pushback against the Biden administration at every turn has gained him a social media following from across the country and around the world, he demurred, “My duty is to stand up and protect the freedoms and the jobs of the people I represent. If that puts me in political jeopardy, then so be it.”

Though widely predicted as a contender in the 2024 presidential election, DeSantis currently keeps his focus locked in on winning reelection in November over a field of 17 other candidates.

As if rehearsed, the audience jeered disapprovingly at Cruz’s mention of “the powerful:” Canadian Prime Minister Justin Trudeau, New York Congresswoman Alexandria Ocasio-Cortez, and the U.S. Department of Justice (DOJ).

He contrasted those, to deafening cheers, by mentioning their rivals of late: “God-fearing Canadian truckers;” “anyone who ever criticized” AOC and was subsequently accused, by her, as harboring resentment at not being able to date her; and parents targeted by the DOJ for speaking up at school board meetings.

Cruz said, “Any accumulation of power that is centralized is fundamentally dangerous for individualized liberty.”

He said politicians on the left want to “take away everyone’s guns because then the state has a monopoly on force,” he said. “If the only people with guns are the jackbooted thugs, then liberty is gone. So we need to decentralize. We need to break it apart. One of the reasons why I am so bullish on crypto(currency), on Bitcoin, is because it is decentralized.”

“We need to break up the means of controlling the citizenry. I want an unruly, uncontrollable American We the People!”

His second bit of advice spoke to the conference theme.

“Respond with joy. Laugh at them. It drives them bananas.”

He pointed to the ongoing bluster, emotion, and debate, around the COVID-19 vaccine as an example.

His third admonition: “Use your voice. Every one of you has a powerful megaphone to the world. Speak out and use your voice.”

Rounding out the evening was a speech by Senator Josh Hawley, 42, pointing out conservative objections to the Presidency of Joe Biden, and began by mentioning Jan. 6.

“They were trying to censor us, to silence us, cancel us, muzzle us. In fact, they had just told me that because I stood up and objected on Jan. 6, that I ought to be run out of the United States Senate,” he said.

“I’ve got news for you. I wasn’t backing down then, and I haven’t changed my mind now. Election integrity matters. Standing up for the rule of law matters. And our stand on that day is key for the liberty that we are fighting for.

“I don’t know about you, but I thought the Biden administration was gonna be pretty mad. Didn’t you? But that turned out even worse than I could possibly have imagined.”

He pointed to the crisis at the Southern border and the botched retreat from Afghanistan.

And that’s just not true, he said.

But one of the biggest mistakes of the Biden administration, he asserted, was the slowdown of American energy production. He added that was what has emboldened Russia’s President Vladimir Putin to invade Ukraine, and why “China feels emboldened to do whatever it is that they want to do when we have a president who doesn’t believe in American strengths.”

“I’ve got a suggestion for Joe Biden,” he said. “Have some confidence in the American people. Show some strength to the world. Open North American energy production. Open it up right now. Put Americans back to work.”

He went on to say, “On Monday, the United States Senate comes back into session, and on Monday, I will introduce legislation to open back up American energy production.”

“It’s the future of the world and it is still even now, the last best hope on Earth.”