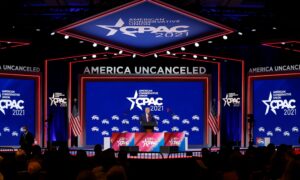 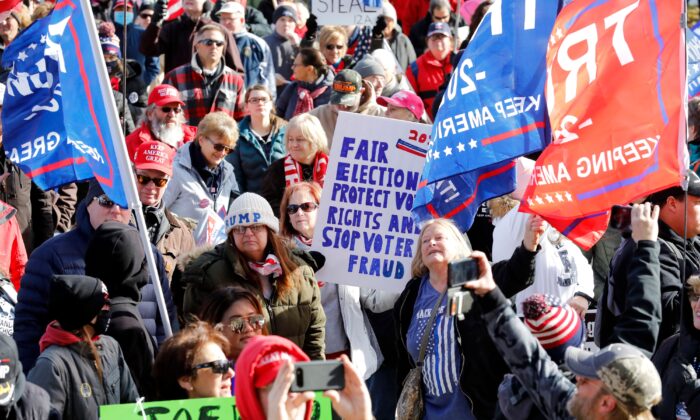 People gather at the Michigan State Capitol for a "Stop the Steal" rally in support of US President Donald Trump on Nov. 14, 2020, in Lansing, Mich. (Jeff Kowalsky/AFP via Getty Images)
CPAC 2021

It was the most heavily featured issue of the gathering, highlighted by speakers that included former President Donald Trump, while attendees voted it the most important issue, which was also apparent from the audience’s reactions during the talks. Speakers assessed what went wrong in November, and outlined steps the Republican Party needs to take to ensure the trustworthiness of the next election.

The 2020 election was marred by a litany of allegations of fraud and other illegalities resulting in dozens of lawsuits. While many of the suits have been dismissed, some are still making their way through the system.

The CPAC speakers often criticized the courts, including the Supreme Court, for their unwillingness to examine the evidence, largely dismissing the legal action on procedural grounds. They also noted, however, that chasing election issues after the fact is often too late.

“You have to address it before the election,” said John Fund, who has written extensively on election fraud for National Review.

Republicans did a good job in some states, such as Florida, Ohio, and North Carolina, but were far from sufficiently prepared in others, such as Georgia, Arizona, Nevada, and Pennsylvania.

Michael Whatley, North Carolina’s Republican Party chair, said that after he took office in 2019, he immediately began to build a team of election lawyers to keep the process under scrutiny. The team kept in close touch with local election boards, making clear that any shenanigans wouldn’t go unnoticed.

Whatley predicted that election integrity measures would need to be heavily litigated going forward and called on the Republican National Committee (RNC) to provide resources for that.

“We need to be lawyered up,” he said.

Tommy Hicks of the RNC said that before the election, the party was more litigious than ever. But Democrats were even more active, outsuing Republicans two to one.

A major part of the concern was that Democrats had pushed to relax election rules through the courts or by executive action by governors, bypassing state legislatures, which several speakers argued is illegal and unconstitutional. The result was intentional chaos, Fund said, where “you can’t tell where the incompetence ends in the election office and where the fraud begins.”

The most fundamental measures to curb any fraud would be for states to put voter ID laws in place and to limit the period when ballots are accepted. It can’t be that ballots are accepted even after Election Day, as it gives the potential fraudsters the information on how many fake votes they need to produce to flip the result, several speakers said.

That’s not to say there’s no room for a compromise, according to Fund. Expanding early in-person voting would be acceptable, he said.

Whatley made the point that even mail-in voting can be made secure.

“It would decrease the necessity for mail-in voting,” he said.

Yet those proposals would largely go out the window if Democrats manage to pass H.R. 1, the speakers seemed to agree. The bill would de facto nationalize elections, dictating in detail how states have to run them. It would, for instance, annul existing state voter ID laws and enable ballot harvesting.

Once passed, the legislation would be difficult to stop in the courts since it includes a provision that it can only be challenged in the District of Columbia, one of the most overwhelmingly Democratic areas in the nation.

The Heritage Foundation’s Hans Von Spakovsky called it “the most anti-democratic bill” he’s seen in his 20 years in Washington.

A number of the speakers emphasized Republicans’ need to call their representatives and pressure them to reject the bill. With the Senate filibuster rule still in place, Democrats would need at least 10 GOP senators to back it, which is unlikely.

A straw poll of the attendees showed 62 percent identified election integrity as their most important issue. Constitutional rights were picked by 48 percent and immigration was third with 35 percent. Each participant could pick up to three issues.

The American Conservative Union, which hosts CPAC, announced the launch of The Center to Protect Elections. Von Spakovsky said Heritage will create a voter integrity ranking so voters can look up the status of their state.