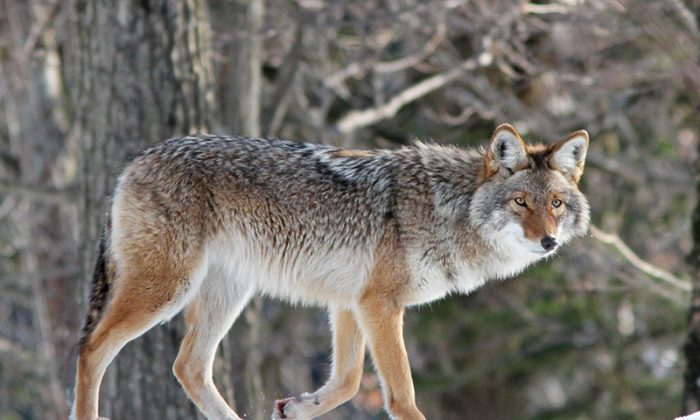 A coyote in New York. (Wildlife NYC)
Crime and Incidents

A rampaging coyote that may be rabid killed a dog and bit two people in a New York town on Wednesday, Feb. 28.

Police officers and the officers from the state Department of Environmental Conservation are hunting the coyote, which they fear may be rabid.

People in Hastings-on-Hudson are being urged to stay out of the woods, especially Hillside Woods, the police department said in an alert.

The attacks both happened in the area, with one attack taking place on Kent Avenue and another near Overlook Road, reported The Journal News.

Both people who were attacked had dogs with them.

One dog was killed by the coyote.

The condition of the other dog was unclear.

The injured persons were rushed to the hospital.

Officers told News12 that another coyote was struck by a car and killed on Wednesday evening, around the same time the attacks took place.

“However, they say the coyotes usually travel in packs, and there is no way to know if the one that was killed is the same one involved in the attacks,” the broadcaster stated.

The Journal News said that the coyote that was killed was taken to the Westchester County Department of Health for testing.

The outlet said that at least one more coyote was lurking in the area.

The coyote was last seen running toward Hillside Woods.

One area resident said that they were walking their dog in the woods near Sugar Pond when a coyote chased them away.

They were able to escape unharmed.

The Dobbs Ferry school district said that students at Springhurst Elementary School were staying inside for recess on Thursday as a precaution.

The Department of Environmental Conservation said that in general, people should not feed coyotes. To prevent attracting coyotes, pet owners are asked not to feed pets outside and to secure their garbage from coyotes and other animals.

Parents should teach their children to appreciate coyotes from a distance.