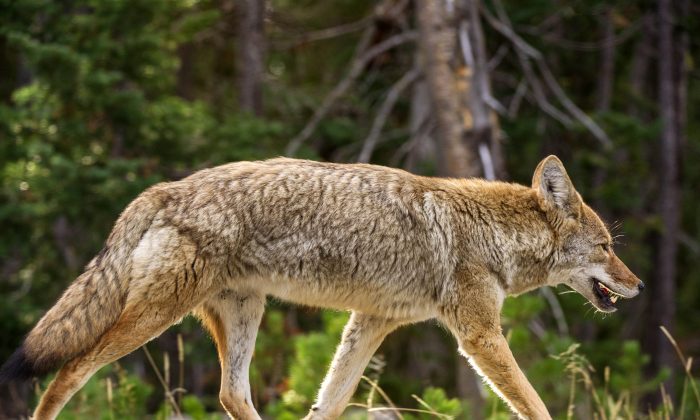 A coyote keeps pace with a car (not seen) as it runs down the road Oct. 8, 2012 in Yellowstone National Park in Wyoming. (Karen Bleier /AFP via GettyImages)
Animals

A woman from Alberta, Canada who struck a coyote while driving said she only discovered later that the animal was stuck inside the front part of her car.

What’s miraculous is that the coyote survived the 30-minute drive to her workplace.

Georgie Knox revealed what had happened in a Facebook post last week on Sept. 9. Knox said she was driving to work early in the morning when the animal darted in front of her car, she thought she had ran over the coyote and killed it—so she continued on driving.

It was only later at a traffic stop near her workplace when a stranger alerted her to the coyote trapped in the front grill of her car.

“Upon stopping at a traffic light by my work, a construction woman notified me that there was in fact a coyote still embedded in my car. When I got out to look, this poor little guy was looking up and blinking at me,” she said in her Facebook post.

After the discovery, she notified wildlife authorities who came to the rescue. Luckily, the coyote had no major injuries.

“I notified Alberta fish and wildlife enforcement right away who came to rescue him. Miraculously, he was freed and had minimal injuries despite having hitched a ride from Airdrie to Calgary at highway speeds! Their biologist checked him over and gave him the good to go.”

She said they released the coyote into the wild at Kananaskis, a park located to the west of Calgary, Alberta.

Recorded video footage posted by Knox shows the wildlife authorities releasing the coyote back into the wild.

“Clearly mother nature has other plans for this special little guy!” she wrote at the end of her post.