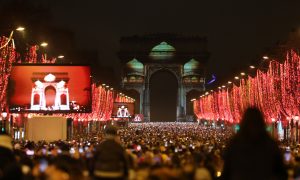 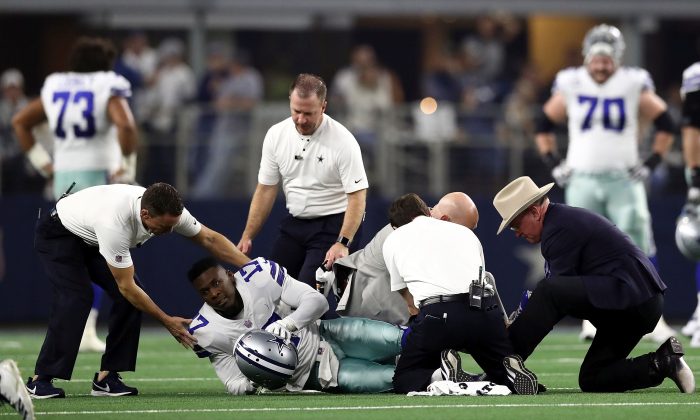 Allen Hurns, No. 17 of the Dallas Cowboys is attended to after being injured during the Wild Card Round against the Seattle Seahawks at AT&T Stadium on Jan. 05, 2019, in Arlington, Texas. (Ronald Martinez/Getty Images)
NFL

Warning: Photo may be disturbing to some readers
By Jack Phillips
biggersmaller
Print

Dallas Cowboys player Allen Hurns suffered a gruesome injury while his team was playing in the opening round of the NFL playoffs.

In the first quarter, Hurns, a wide receiver, was being tackled by Seahawks safety Bradley McDougald when his leg bent at an odd angle.

Hurns was seen punching the ground following the injury. Fox announcer Joe Buck reacted in shock after the replay was shown, and footage of the injury was not shown again.

Cowboys players had this to say about Allen Hurns ghastly in… https://t.co/08cU4cJ5MY

Following the injury, players on both teams cleared the way for medical staff. The footage showed Hurns’s left foot pointing up in an unusual direction.

As Hurns, who was in tears, was being taken off the field, players on both sides went to offer support. He raised his hand to the crowd, which drew a cheer.

Cowboys coach Jason Garrett, who held Hurns’s hand during the game after he was being tended by medical staff, issued an update about the player’s medical condition.

“Obviously not a good situation for Allen. It’s a serious injury that he has,” Garrett told reporters following the Cowboys’ 24-22 victory over the Seahawks, according to the NFL Network.

The video of the injury can be seen below (WARNING: GRAPHIC):

Not for the squeamish, but here's the Allen Hurns injury. It's gruesome. pic.twitter.com/2JARVLixza

Cowboys owner Jerry Jones said that Hurns suffered a dislocated left ankle in addition to fractures, the Network reported. He said Hurns was in surgery following the team’s game.

Garrett also told ESPN that it’s a “significant injury to his lower leg.”

But an ESPN reporter said Hurns is expected to return to playing football in August unless there are complications.

He added: “You never want to see an injury like that to any of your brothers out there. It’s unfortunate. I feel for him, and I just hope he’s in good spirits. I’m sure he’s got a lot on his mind. …  That’s never a good feeling.”

Hurns caught 20 passes for 295 yards this year after he signed a two-year deal with Dallas as a free agent.

“It’s a challenging situation for players because you’re emotionally ready to play, you’re going, you’re in the flow of the ballgame, and that happens,” Garrett said after the game, ESPN reported.

“And trust me, the guys on our football team care so much about each other and love each other so much. They see their brother on the field like that; it’s not easy. But you have to regroup. You have to be professional and get back to work,” the coach said.

Earlier this season, Washington Redskins quarterback Alex Smith suffered a severe leg injury, taking him out for the remainder of the season.

In December, Smith’s wife posted a photo of the quarterback sitting down next to a Christmas tree.

HOME…This last month has been a difficult ride. Our family is beyond happy to have this man with us and home. This experience has given us great perspective and gratitude for all the people and blessings in our lives. We couldn’t have gotten through it without our amazing family, friends and community. A special thank you to the relentless doctors, nurses, techs, hospital administrators, the Snyder family and the Washington Redskins.

“This last month has been a difficult ride. Our family is beyond happy to have this man with us and home,” Smith’s wife wrote.

“This experience has given us great perspective and gratitude for all the people and blessings in our lives. We couldn’t have gotten through it without our amazing family, friends, and community. A special thank you to the relentless doctors, nurses, techs, hospital administrators, the Snyder family, and the Washington Redskins,” she added.