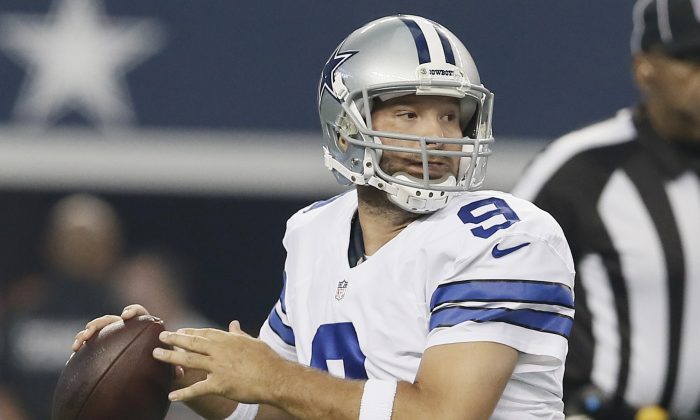 Dallas Cowboys quarterback Tony Romo (9) looks for a receiver during the first half of an NFL preseason football game against the Baltimore Ravens, Saturday, Aug. 16, 2014, in Arlington, Texas. (AP Photo/Brandon Wade)
NFL

The Dallas Cowboys will play the Miami Dolphins at 7:00 p.m. Saturday. A live stream is available.

Dolphins rally past Cowboys, 25-20
MIAMI GARDENS, Fla. (AP) — Orleans Darkwa ran in from 1 yard with 1:45 left, and the Miami Dolphinsrallied from two scores down in the final minutes to beat the Dallas Cowboys 25-20 on Saturday night.

Ryan Tannehill completing 13 of 21 passes for 119 yards with an interception for Miami, and Knowshon Moreno had 64 yards on 10 carries in his preseason debut.

Tony Romo played the first half and completed 10 of 18 passes for 87 yards for the Cowboys. Tyler Patmon had a 9-yard interception return for a score and LaRon Byrd caught a 27-yard touchdown pass for Dallas, which got field goals of 52 and 50 yards from Dan Bailey.

“It doesn’t really count,” the Miami Dolphins quarterback said. “But it matters.”

When the Dolphins play host to the Dallas Cowboys on Saturday night, it’ll most definitely matter for plenty of players, particularly to those on the proverbial bubble at this point in training camp.

For the starters like Tannehill and his Dallas quarterback counterpart Tony Romo, it’s the first and likely last time they’ll get extended time in game situations with their fellow first-stringers before the season starts for real next month. For the reeling Dallas linebacker corps, it’s a possibly a chance for some to step up and secure a job. And for coaches, it’s one more look around before it’s time to start paring down a roster.

“The game plan is in, every part of it is in,” said Dolphins coach Joe Philbin, who made this week of practice very similar to what a regular-season week would be like for Miami. “So now guys get a chance to kind of let it sink in and get ready to perform on Saturday night.”

Neither quarterback has exactly seen much in the way of tests so far in the preseason. Tannehill has completed 15 of 20 passes in two games; Romo completed four of five in his lone preseason work this summer as he continues to move on following back surgery.

The Cowboys haven’t said how much action Romo will see on Saturday, though it figures to be more than the 16 snaps and 14 official plays he got last week against Baltimore.

“Hopefully he gets a couple good drives in the game and he looks himself,” Cowboys coach Jason Garrett said. “He looks comfortable, he’s sweating, he’s moving around and playing spontaneously. That’s really what you’re looking for as much as anything else.”

Romo believes he’s ready for Week 1, and to him that’s what matters. If he wasn’t, he wouldn’t be out there now, he said.

“Obviously right after the surgery it would’ve been a different story,” said Romo, who has played through a number of issues in recent years but has missed just one of Dallas’ last 48 regular-season games. “But at this point, yeah, there’s no question you’d be playing a football game. I mean, I don’t know that you would go to play in the preseason if you didn’t think you could play football.”

Not having questions at quarterback, that’s obviously an ideal thing for any football team right about now.

That’s not to say these clubs don’t have plenty of other issues to address.

Dallas is simply reeling at linebacker, with Sean Lee gone for the season because of a torn knee ligament and after finding out Thursday that a neck injury sustained by DeVonte Holloman – who was one of the players expected to pick up some of Lee’s workload – is probably going to end his career.

The Cowboys should get to see cornerback Brandon Carr on the field. Carr has been dealing with the death of his mother, who had breast cancer, but the veteran believes he’s up to speed on Dallas’ schemes for the season.

“I’ll play as much in the game as they want me to and I’ll take reps in practice next week and just get ready for the home opener,” said Carr, who practiced all week. “I feel like I’m in pretty good shape. I’m going tax my body this week as far as putting it on myself to get myself in condition for those four quarters and those long drives.”

Miami may get to use tight end Charles Clay for the first time in this preseason. Running back Knowshon Moreno’s status for his preseason debut remains unclear as well, but wide receiver Mike Wallace said he figures to play at least the entire first half.

“It’s big for us to come out and show up in front of our fans, just to get them up and give them something positive to look forward to for the season,” Wallace said.

NOTES: TE Michael Egnew, the Dolphins’ third-round pick in 2012, was among three players waived on Friday. Egnew caught seven passes for 69 yards while seeing time in all 16 games last season after appearing in only two games as a rookie. Also waived Friday: DT Micajah Reynolds and DB Jalil Brown (waived-injured).