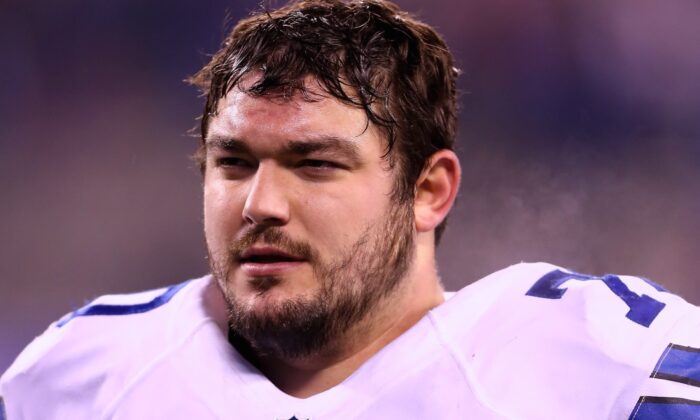 Zack Martin #70 of the Dallas Cowboys walks off the field after a loss to the New York Giants at MetLife Stadium on Dec. 11, 2016 in East Rutherford, New Jersey (Elsa/Getty Images)
NFL

The Dallas Cowboys’ Zack Martin could miss the 2021 season opener on Sept. 9 against Super-Bowl champion Tampa Bay Buccaneers after he tested positive for the CCP (Chinese Communist Party) virus.

The positive COVID-19 test for the 30-year-old four-time All-Pro right guard came back on Sept. 4 after he experienced mild flu-like symptoms and loss of taste, The Dallas Morning News reported.

“He’s frustrated obviously,” head coach Mike McCarthy said of Martin, who is fully vaccinated against the CCP virus. “But hey, this is the world we live in right now.”

In the NFL, return-to-play protocols for fully vaccinated players require two negative tests at least 24 hours apart after being symptom-free for 48 hours.

With Martin likely out, the Cowboys will again be without one of their top three offensive linemen after the trio never played together in 2020.

Third-year pro Connor McGovern, who filled in for Martin when he was sidelined by a calf injury last year, is set to replace him again for the kick-off at 8:20 p.m. ET in Tampa, Florida against the Buccaneers with seven-time champion quarterback Tom Brady.

“Zack’s our best player on our offense. I mean most runs, they coming back behind him,” Cowboys’ running back Ezekiel Elliott said, ESPN reported.

“It’s disappointing but you can’t harp on it, can’t let it be more than what it is. I mean, definitely going to miss him, definitely wish he was out there, but we still have a game to go play and we got to try and get the job done,” he continued.

In a statement last month, the team announced that 100 percent of the club’s coaching staff has been fully vaccinated while players’ vaccination rate is 93 percent.

So far this year, the Cowboys have had more players testing positive for the CCP virus than all of last season. The outbreak started with defensive coordinator Dan Quinn before the second-to-last preseason game against Houston.