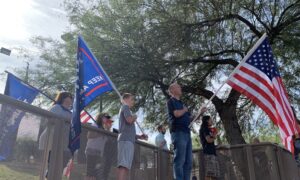 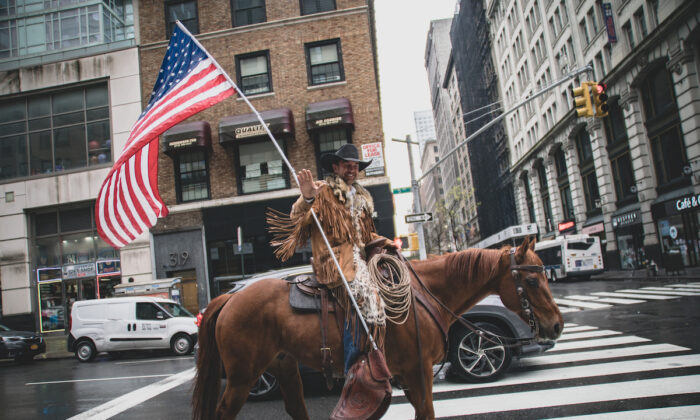 Couy Griffin, founder of the organization Cowboys for Trump, has had his right to have a firearm reinstated—with limitations—with the favorable court ruling coming after Griffin complained of receiving death threats, according to multiple reports.

Judge Trevor N. McFadden of the U.S. District Court for the District of Columbia ruled on April 7 to allow Griffin to keep guns, but only in his home, according to local outlet KOB-TV.

“I am going to allow him to have guns at his place of residence, given your lack of criminal record, and your concerns about safety,” McFadden said, according to Inner City Press. “You live in a rural area where police response is going to be delayed. No guns in the car, though.”

Griffin, who is also a county commissioner in New Mexico, was arrested by the FBI on Jan. 17 and charged with knowingly entering or remaining in a restricted building or grounds without lawful entry after video footage showed him breaching the Capitol grounds on Jan. 6, according to the Justice Department. He denies federal charges that he knowingly entered barricaded areas of the Capitol grounds with the intent to disrupt government as Congress convened for a joint session to certify electoral votes.

At the April 7 hearing, Griffin addressed the court, reiterating his position that he isn’t guilty. He waived his right to a jury trial and instead requested a bench trial.

“I’m not concerned about being found guilty. I didn’t enter the Capitol. I did not partake in what the government is accusing me,” Griffin said, Inner City Press reported.

Initially held in pretrial detention, Griffin was released from federal prison on Feb. 5, pending trial, and returned to New Mexico.

In an order (pdf), Chief U.S. District Judge Beryl Howell overturned a lower court ruling, saying she weighed Griffin’s unrepentant appearance among the crowd at the Capitol against his candid subsequent interactions with law enforcement. She noted repeatedly that Griffin on Jan. 6 didn’t carry weapons, commit violence, or enter the Capitol.

“I appreciate that the charge here is that he disregarded signage about restricted areas of the Capitol on Jan. 6. But his subsequent cooperation with law enforcement showed that he is not a person who has a categorical disdain and disregard for any and every government act or authority,” Howell said at the time.

Griffin told the court on April 7 that he has received death threats. “I want my firearms back, to protect my family,” according to Inner City Press.

“I received pictures of my family with crosshairs on each of our heads including my son who was not even a month old,” he said, according to the outlet.

Griffin’s lawyers argued that even if convicted of current charges, they are misdemeanors and wouldn’t lead to him losing his gun rights.

While the U.S. attorney representing the government in its case against Griffin objected to restoring his right to possess firearms, McFadden ruled to allow it. He set the next proceeding for April 27.

Under the terms of Griffin’s release pending trial, he is banned from visiting Washington outside of court proceedings, must surrender his passport, and—prior to McFadden’s April 7 ruling—was prohibited from possessing a firearm.

According to the Justice Department and an affidavit (pdf), Griffin told FBI special agents that he had traveled to the nation’s capital on Jan. 6 with another person to participate in a protest over election integrity.

When Griffin arrived at the U.S. Capitol, he noticed a large crowd forming around the barricade and said he was “caught up” in that crowd, which pushed its way through the barricades and into a restricted area, he told agents.

Griffin said he and his friend didn’t enter the U.S. Capitol building at any time and remained on the steps outside the building during the breach. During that time, he led a group of protesters in prayer using a bullhorn “outside the Capitol, but up where the president is inaugurated at.” Videos of the incident and other open-source materials corroborated Griffin’s statements, according to the affidavit.

He said that the police never asked him to leave the area, and he and his friend exited the U.S. Capitol grounds peacefully.