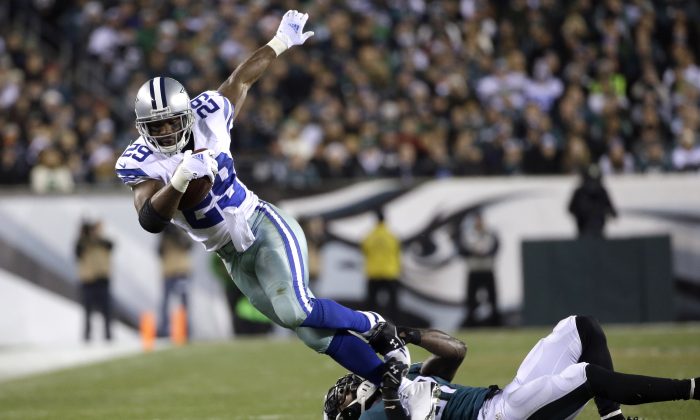 Dallas Cowboys' DeMarco Murray (29) tries to break free from a tackle by Philadelphia Eagles' Malcolm Jenkins (27) during the first half of an NFL football game, Sunday, Dec. 14, 2014, in Philadelphia. (AP Photo/Michael Perez)
NFL

A new report from ESPN Dallas states that Cowboys running back DeMarco Murray will have surgery Monday to repair a broken bone — specifically, a broken fourth metacarpal bone, in his hand.

The bone is the “long bone in the hand that runs from the base of the fourth finger to the wrist”.

Injuries have been constant concern for Murray in his first three NFL seasons, where he missed 11 games due to ankle, foot, and knee injuries.

In his breakout 4th season, Murray had thus far injury been free in a year that has seen Murray produce one of the best rushing seasons in recent memory.

Murray currently has 1687 yards on the year, and needed an average of 156 yards in his final two games to reach a running back’s esteemed 2000-yard plateau.

However, Murray’s substantial workload had always been a point of concern, of which the Cowboys seemingly slimmed down a bit starting Week 8.

If Murray cannot go in the Cowboy’s Week 16 match with the Colts, Joseph Randle and Lance Dunbar will be expected to handle running back duties.