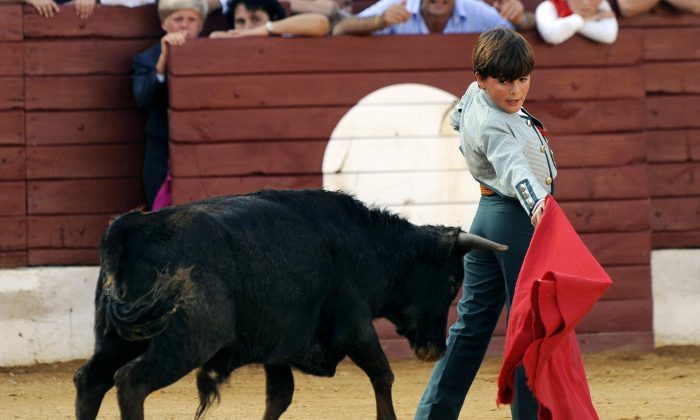 In this file image, a 10-year-old Franco-Mexican boy takes on a bull-calf in a becerrada spectacle on Aug. 6, 2008 in southwestern France. (Jean-Pierre Muller/AFP/Getty Images)
Europe

Graphic video footage has emerged of wannabe bullfighters testing out their amateur skills with cloaks, lances, and swords on 2-year-old bull calves.

Footage from the arena in Alalpardo, Madrid shows the amateur matadors honing their clumsy techniques on the calves, which can be heard crying out for their herd, according to animal rights groups.

Anti-bullfighting organization Torture is Not Culture said that the “cowardly” spectacle is cruel for two reasons. Firstly, young bulls are weak and highly sociable, and suffer from the physical ordeal, as well as the fear of being isolated from their herd.

Secondly, the amateurs lack the skills of the pros, prolonging the agony of the fight with half-botched attempts to dispatch the calves, repeated stabbing and repositioning with their lances as they miss the target shoulder muscles and hit the animal’s lungs.

A fight with yearling bull-calves is known as a becerrada. It is often used as a way to help train young bullfighters—including children—without the dangers of a full-grown adult animal.

Rights groups say that the “cowardly” becarradas are crueler than regular bull-fighting, and encourage blood-lust in young people.

Analysis of the video by a veterinarian called the matadors “cowardly” and accused them of mental and physical torture.

Fully trained matadors are able to kill the full-grown bull—which has been systematically weakened to allow them to move in closer—with one carefully placed sword-thrust between the shoulder blades down to the heart.

However, becerradas are usually carried out by “inexperienced people, like students of bullfighting schools, amateurs or the general public,” according to a statement by Torture is Not Culture.

According to the group, the amateurs place the “instruments of torture in the wrong places of the animal body, often extracting them and nailing them again and again after unsuccessful attempts, causing a torment without equal to these small animals.”

The event in Madrid was attended watched by around 100 spectators, according to the organization.

Not all bullfighting traditions involve the killing of the bull.

In a non-violent style of bullfighting exhibition, sometimes described as “bull leaping,” the fighter, takes on the bull sans cape or weapon in a show of athleticism and bravado.

The contestants, called “recortadores”, compete to earn points for daring and skill as they perform acrobatic moves to dodge the charging animal, which is allowed to return to the pen unharmed.

While less harmful to the bull, however, the bullfighting style is no less risky to the person.

In May this year, a teenage recortadore died after being gored by a bull during a spring festival in Spain.

Fran Gonzalez, 19, was the second person killed by a bull during several days of a traditional festivals, which often feature bull running and bull fighting of various traditions.

Gonzalez was gored in the groin by a bull on May 1, and lost consciousness on the scene, before being taken to hospital where he was pronounced dead a short while later.

In the bullfighting traditions that pit a bull against a matador and his companions, armed with red capes, lances, and swords, injuries are fairly common, but deaths are rare.

For 30 years, not a single Spanish bullfighter was killed in the ring, until 29-year-old Victor Barrio—live on national television—was caught in the chest by the horns of a bull in 2016.

In 2013, 31 matadors were gored in bullfights in Spain in one year, according to The Telegraph.