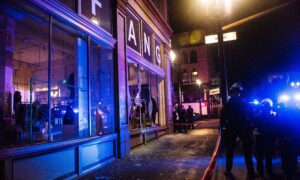 Police and ranchers in New Mexico are hunting the people responsible for a series of fatal cow shootings that started this year.

The killings are widespread and increasing in Eddy County, police say, and local ranchers who depend on the cattle for a living are plagued by the mysterious murders.

Six cattle on two separate properties were fatally shot on Wednesday, Aug. 1, according the Eddy County Sheriff’s Office. The cows were found dead on the scene in the 600 block of Angel Ranch Road with a swarm of flies buzzing above.

Subsequent investigation showed that the cattle was shot with a high-caliber rifle from within a half a mile radius.

The livestock involved in the latest killings include a red roping steer, a black cow, a black cow with a white face, two black Angus cows, and a black bald cow. The animals are valued at about $17,000 to $20,000, reported Current-Argus.

“This morning I am feeling very discouraged, disappointed and very very angry,” wrote Brooke Wilson, from Calrsbad, New Mexico, on her Facebook page.

Two cows and a roping steer were shot and killed on Wilson’s property and another cow and calf were wounded, on two separate occasions. Wilson’s neighbor, Chase Brown, also had a cow and a calf killed.

“The roping steer that was shot is an issue in itself that shows the situation we have in Eddy County is out of control. THIS HAPPENED AT MY HOUSE!! I hate to think of what could happen next,” Wilson wrote.

Police have labeled the case as “extreme animal cruelty,” according to Current-Argus, which could lead to a sentence of up 18 months in prison and repayment to the owners.

Police believe the latest killings on Wednesday were malicious, Lt. Matt Hutchinson said, in addition to a similar June shooting.

“There’s no legitimate reason for this,” Hutchinson said. “These animals are not being killed for meat. This is extreme cruelty. They’re killing them for no other reason.”

Authorities don’t believe the shooting was accidental, like from game hunting, because the cows bodies were left behind.

“We do believe the individuals involved are intending to hurt these animals,” he said. “It’s an intentional act. It doesn’t appear to be an accidental shooting.”

Investigators are looking for clues to connect the Wednesday killing to the one from June that took place on Dark Canyon Road.

“It’s possible they are related,” Hutchinson said. “We’re going to try to correlate the incidents. There is a common factor in that the cows are dead.”

There has been an increase in cow shootings this year, Hutchinson said.

“Over the course of the last year, we’ve seen these increase,” Hutchinson said. “They’re in several parts of the county. We’ve been tracking them.”

Police are looking into a number of people who could be involved.

“It’s not just a pet. When [the shooters] are doing this, they’re taking profit away from [the ranchers] To them, it’s money,” said Hutchinson.

Sheriff Mark Cage asked locals to look out for suspicious people and cars.

“This is our livelihood and more importantly our way of life,” Wilson wrote.

Eddy County Cattle Growers has offered a reward for any information that leads to the conviction of the people involved.