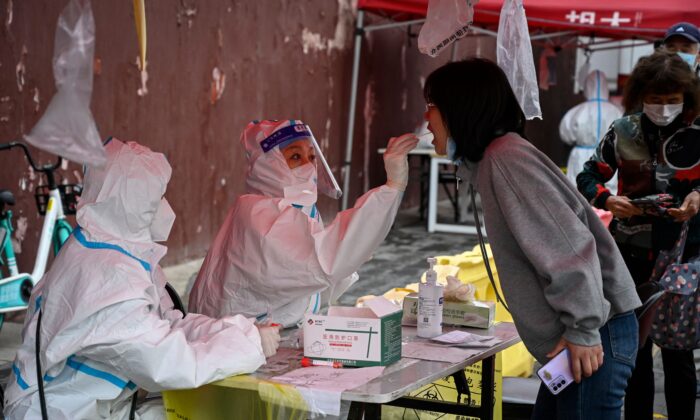 A health worker takes a swab sample from a woman to be tested for COVID-19 coronavirus at a makeshift testing site in Beijing on April 27, 2022. (Jade Gao/AFP via Getty Images)
INSIDE CHINA

COVID-19 Testing and Isolation: No Let Up for Residents Caught in Shanghai Lockdown

Despite weeks of lockdown, Shanghai authorities have enhanced anti-COVID measures in a bid to achieve zero cases in all 16 districts, with some residential compounds being fenced off and daily mass testing for thousands of residents.

On May 1, Gu Honghui, deputy secretary-general of the Shanghai municipal government and director of the city’s anti-pandemic office, said that six districts in Shanghai have reached “basic zero-clearance” at the social level, China National Radio reported.

The social level zero-clearance, according to China Daily on April 27, is one phase of the Chinese Communist Party’s zero-COVID policies, which refers to no new infections being found outside quarantine areas.

Districts that do not achieve the set target will be subject to comprehensive curbs, with residents being locked in their houses and the use of nucleic acid testing and screening.

Pudong district is under such restrictions to date.

Ms. Xu, who lives in a residential compound in Pudong, told The Epoch Times on April 28 that the compound received an urgent notice requiring all residents to stay at home and keep silent during a “battle of zero-clearance” period from April 25 to 27, except for unified nucleic acid testing.

In addition, the residents were requested to drop all orders and delivery activities, Xu said adding that the compound’s express receiving office was closed and all couriers rejected.

“It’s even more stringent than before,” Xu said, referring to how entire buildings have been isolated with closed gates and locked doors while being monitored 24 hours a day.

The notice was just one of the anti-virus curbs under various names. Notably, it required people sealed inside to remain silent about their plight, which added further stress to the residents.

Over the past weeks, the ongoing lockdown in Shanghai has stirred public outrage, with residents sharing online how they were struggling to seek food and medical care. Many such expressions were quickly censored.

Ms. Xu and other Shanghai residents, feel it’s hard to endure the lengthy lockdown and do tests every day. “Thousands of residents in the entire neighborhood gather in the central garden daily to take samples and get tested,” she said.

Ms. Xu said the building she lives in has 25 floors and 200 residents.

“The gate is locked, no one can go outside. There are guardians monitoring over us 24 hours a day,” she said.

Another building her friend lived in was sealed off by a 2-meter-high fence.

Ms. Xu expressed concern about the condition of an elderly couple living in the same building, who had both tested positive since March 21 and were immediately quarantined for 39 days as of April 28, she said.