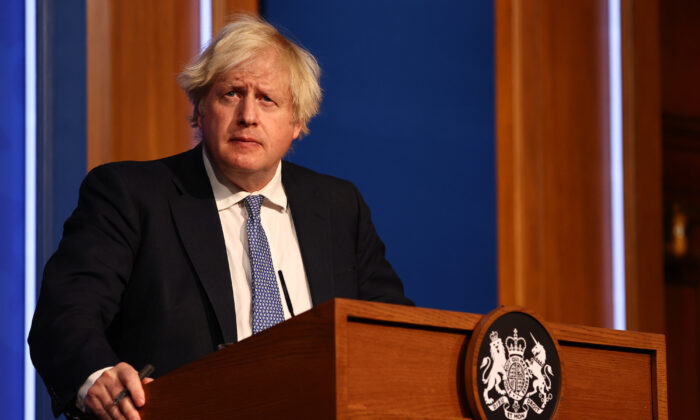 COVID Passes for Events in England, as Johnson Brings in ‘Plan B’ Over Omicron Fears

NHS COVID Passes will be obligatory for large-scale events and nightclubs in England, as part of new rules aimed at slowing the spread of the Omicron COVID-19 variant, British Prime Minister Johnson has announced.

The new restrictions—part of “Plan B” which the government has kept in its back pocket since early autumn—include a return to guidance to working from home and to obligatory mask-wearing in many public indoor places.

NHS COVID Passes, which indicate both COVID-19 vaccination and testing status, will be required to gain entry to nightclubs, indoor venues with over 500 people, and outdoor venues of over 4,000 people. The government stopped short of an outright ban on those who are not double vaccinated, however, by including a negative lateral flow test in the rule.  The measures come into effect in a week.

“From this Friday we will further extend the legal requirement to wear a face mask in most public indoor venues including theatres and cinemas,” said Johnson during a press conference on Dec. 8. “There will be exceptions where it’s not practical, such as when eating, drinking, exercising, or singing,” said Johnson.

People are also being asked to work from home if they can, starting from Monday.

Johnson said that the return to restrictive measures was due to concerns about the Omicron variant.

“568 cases have been confirmed in the UK,” he said. “The true number is certain to be much higher.”

Johnson said that Omicron cases in the UK have been doubling every two or three days, mirroring the situation in southern Africa.

“We can’t yet assume that Omicron is less severe than previous variants. So while the picture may get better—and I sincerely hope that it will—we know that the remorseless logic of exponential growth could lead to a big rise in hospitalisations and therefore, sadly, in deaths.”

“That’s why it’s now the proportionate and the responsible thing to move to Plan B in England.”

Asked if the government was considering the option of mandatory vaccinations, like some European countries, he rejected the idea.

“I said right at the beginning of this pandemic, as soon as we were really talking about vaccination seriously, that I didn’t want us to have a society and a culture where we force people to get vaccinated. I don’t think that’s ever been the way we do things in this country.”

“We’ve been able to achieve through the voluntary-ism of the British people, through their incredible, public spiritedness, willingness to roll up their sleeves and get vaccinated.”

The announcement comes as Johnson faces pressure and calls for his resignation over allegations of a Christmas party held last year at Downing Street in violation of lockdown rules. His official spokeswoman today resigned after a video emerged of her at that time joking about a party—seen by many as evidence that the party did go ahead.

After the lifting of all pandemic restrictions in the summer, according to official data, the number of cases in the UK have fluctuated, but overall remain somewhat stable. Hospitalisations rose through July after the easing of restrictions and have remained stable at around one quarter of the peak experienced in the wave last winter, dropping slightly over the last month. Deaths have followed a similar trend, staying within the range of 100–150 deaths per day.