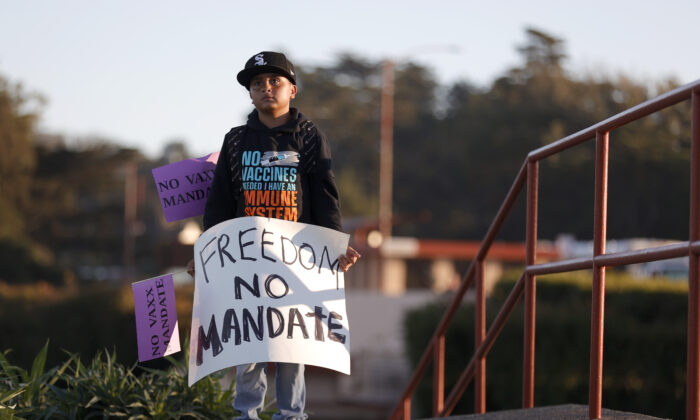 A young boy holds a sign during an anti-vaccination rally at the Golden Gate Bridge in San Francisco on Nov. 11, 2021. (Justin Sullivan/Getty Images)
Viewpoints

COVID Panic Will Only End Through Civil Disobedience and Mockery

Had enough yet? Have you figured it out yet? Has the absurd panic over the COVID “pandemic” taught you nothing? Have you not wondered why “two weeks to slow the spread” and “15 days to flatten the curve” has turned into an indefinite sentence of house arrest, with no end in sight, no matter how many useless “vaccine” shots you get?

Time to wise up.

There was never anything to fear about COVID-19, inflicted on the world by the Chinese Communist Party—whether through malice or ineptitude, it doesn’t matter—via the Wuhan Institute of Virology, with underwriting by the U.S. government because of Dr. Anthony Fauci, a lifelong bureaucrat and swamp creature.

Sure, like the herd-culler it was designed to be, it picked off the oldest and most vulnerable of the world’s populations. Near the end of your life, the littlest things can tip you over the edge, and in the CCP virus, the littlest thing was found, developed, weaponized, and deployed.

Governments and the media did the rest. What if they had instead done … nothing? Just let the disease run its course, as society used to every year, with some flus more virulent than others, and acknowledge that precariously balanced elders were going to be hardest hit by pulmonary illnesses.

Pneumonia is one of the leading causes of death among the elderly, and we don’t shut the planet down for that.

What if the buzzard media hadn’t set up its “grim milestone” vultures to lovingly record every death that could be remotely linked to the “pandemic” until they had turned an annual event into their favorite story, The End of the World.

What if the media hadn’t moved the goalposts by fixating on the meaningless statistic of “cases” instead of actual fatalities (roughly 2 percent of all infections worldwide), and thus deliberately confused and terrified the population, making them easy prey for the totalitarians in elected office?

But no. There was Fauci day after day standing next to President Donald Trump, pushing the hysteria for all it was worth (he did something similar back in the early days of the AIDS outbreak, stoking fears that even heterosexuals were at risk from a medical condition with very specific causes). A self-aggrandizing alarmist, Fauci has benefitted greatly throughout his interminable career as a “public servant” by spreading alarm whenever he can.

He’s still doing it: “‘COVID-19 cases are starting to climb again in select regions across the U.S. after stabilizing at a high level following this summer’s delta surge,’ White House chief medical advisor Dr. Anthony Fauci said Monday,” CNBC reported. “Fauci’s comments came just a day after the country reported a seven-day average of more than 82,000 new cases, up 11 percent from the week before. … ‘There’s a lot of good news, but some challenging news that we really need to address as we go into the winter months,’ Fauci said.”

In other words, this will never be over, at least until the American people put an end to it via widespread civil disobedience and mockery. But we knew that from the jump. COVID was simply too good an excuse for the Democrats to damage Trump, tank the economy, vastly expand the powers of government, declare more or less permanent “states of emergency,” alter constitutionally prescribed voting rules, and then, with Joe Biden’s election safely ensured in the few swing states that mattered, turn their socialist wrath on the American people.

In retrospect, the greatest failure of the Trump administration was not its inability to get the wall on the Mexican border erected, but the foolish elevation of a relatively minor respiratory illness—the flu, by another name—into a national emergency, with Fauci right there to fan the flames.

From the day he took office, poor Donald Trump—the worst presidential judge of character since Ulysses S. Grant—never understood the depths of animosity against him by those he surrounded himself with.

A political naïf to the end, Trump relied on the least reliable set of advisers possible, including his own daughter and her husband (“Javanka,” known derisively around the White House among the ever-dwindling band of MAGA supporters as “the Democrats”), and thus triggered a succession of self-inflicted disasters, including horrendous initial picks for secretary of state, attorney general, and chief of staff.

True, just because you’re paranoid doesn’t mean they’re not out to get you, and the Democrats had begun to besiege Trump even before he took office. The recent revelations about the criminal “Russian collusion” hoax—another enormity in which the mainstream media was completely complicit and ought to be made to suffer for it by the overturning of Times v. Sullivan, which protects them from well-deserved libel suits—prove beyond doubt that an unholy alliance of Hillary Clinton, the intelligence community, the Democratic Party, The New York Times, and The Washington Post not only colluded but actively collaborated with foreign spies, a thoroughly Soviet-penetrated think tank (the Brookings Institution), and rogue Russians to bring down the duly elected president of the United States even before he was inaugurated.

The Russian hoax ultimately went nowhere, legally, but served its purpose of deeply wounding the new president. The COVID “Black Death” fraud, however, finished him. Just as Fauci had hyped the threat of AIDS in the 1980s, so he returned, this time with a vengeance, to willfully mispresent the threat even as it elevated his profile—and Trump, alas, let him.

And here we are, almost two years later, watching the same movie over and over again. It’s been clear for months that the vaccines don’t work as advertised—they may do something, but preventing the spread of COVID is not one of them—that masks are mere signals of fearful, abject subjugation by the Karen population, and that the dictatorial power arrogated to themselves by governors such as Gavin Newsom in California are, unless a revolution occurs, here to stay.

Meanwhile, vaccine “mandates” are spreading, Austria has begun to lock down the unvaccinated, the Italians are instituting “health passes” to further tighten the screws on non-conformists, conscientious objectors, and even those who’ve had the disease and now have natural immunity against it. And in order to get their way, they’re calling out the cops and the dogs and the water cannons to get it.

What does that tell you about their real intentions? And what are you going to do about it?