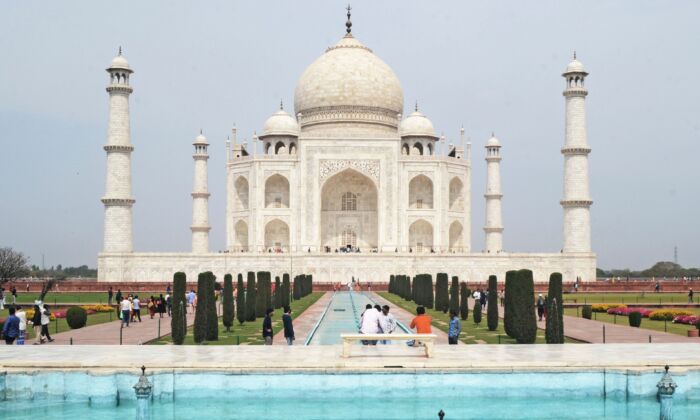 A low number of tourists are seen at Taj Mahal amid concerns over the spread of the COVID-19 novel coronavirus, in Agra on March 16, 2020. (Pawan Sharma/AFP via Getty Images)
India

JAIPUR, India—The travel and tourism industry in the world’s second-most populous country is in crisis.

The COVID-19 pandemic has dealt a crippling blow to the industry, which accounts for around nine per cent of India’s gross domestic product (GDP).

India’s GDP in 2020 was estimated at $2.66 trillion, the sixth largest economy in the world.

“This is one of the worst crises ever to hit the Indian tourism industry impacting all its geographical segments: inbound, outbound and domestic; almost all tourism verticals: leisure, adventure, heritage, meetings, incentives, conferencing and exhibitions, cruise, corporate, and niche segments,” according to the Confederation of Indian Industry, a non-governmental trade association and advocacy group.

In a report the confederation noted that the slow down, mainly due to lockdowns being imposed due to Covid-19, was initially expected to affect revenue streams till October 2021.

The arrival of Omicron has changed those expectations with visitors cancelling bookings.

Hotels that reported some better days after the end of the second wave of COVID-19 in late June have again started to see a lean period due to the new variant.

Occupancies are hovering around 40-50 per cent on an average and the worst hit are small or budget hotels.

The confederation report noted the entire value chain linked to travel and tourism is likely to lose around $65.57 billion, with the organized sector alone likely to lose $25 billion.

It said the figures are quite alarming and the industry needs immediate measures for survival.

In India the tourism season runs mainly from October to the end of March but for the past two years this period has been the worst hit.

Inbound tourism was almost nil and the industry was more or less surviving on domestic tourism, which now has been affected badly by Omicron.

Director of travel agency Rajputana Holiday Makers Sanjay Kaushik said, “Before Covid India’s tourism sector was flourishing as tourists from all over the world were visiting the country in large numbers. And all of a sudden the pandemic came and everything stopped, it came to standstill and the industry suffered a lot.”

Kaushik said large numbers of people involved in tourism—such as guides, taxi drivers, tour operators, hoteliers, even hawkers—lost their jobs as thousands of restaurants and hotels were forced to close.

The tourism sector provides employment, direct and indirect, to around 44 million people. With lockdowns due to the coronavirus pandemic the sector is looking at job loss of roughly 30 percent to 40 percent of the total workforce.

“Tourism fraternity was anxiously waiting and expecting some kind of relief announcements from the government but nothing has happened so far,” Kaushik said.

“In short it has been a very tough time for the industry. Till December … there was a ray of hope as hotels started to report good occupancies thanks to domestic tourists then came Omicron and cancellations started to come in and now the situation is almost as bad as it was during the first and second wave of Covid,” Kaushik added.

However Himmat Anand, founder of Tree of Life Resorts and Hotels, disagreed and said that the past two years would mean different things for different segments in hospitality and tourism.

Tree of Life Resorts and Hotels is a city based chain across India.

“For the large city hotels it would mean time spent trying to survive. Their much-touted selling points of being in the city centre with large banquet halls have been shunned by the travellers.

“For those resorts with a limited number of rooms, low overhead expenses, large open spaces, slightly away from city centres–business has been, I would say, not bad.”

“And in all of this domestic travel for India has come out as the knight in shining armour. This segment has always been the backbone of travel in India–just that it never got the recognition it rightfully deserved.”

“By the last count, some 900 million Indians travel within the country every year.

“Yes, most of this is religious travel on an extremely low budget and visiting friends and relatives. However, even if one were to take just 20 per cent of this as middle-class and upwards travel, we are looking at close to 200 million well-heeled travellers!

“Compare this with the 12 million overseas tourist arrivals which India claims to get annually and it is not difficult to understand where the focus should be,” he said.

Covid-19 has brought back that focus, Anand added.

Sounding optimistic, he said, “I believe that domestic travel will come back in full strength by early March–provided there is no fourth wave!”

Medical tourism is one other sector, that has been affected by Covid-19.

From its current level of $5 billion to $6 billion Medical Value Travel was expected to grow to $13 billion by 2022—with an adequate policy push. However, with Covid-19 around it now seems difficult, Singh said.

Singh said that the government needs to allow a bilateral travel bubble with the countries from where India gets tourists seeking medical help.