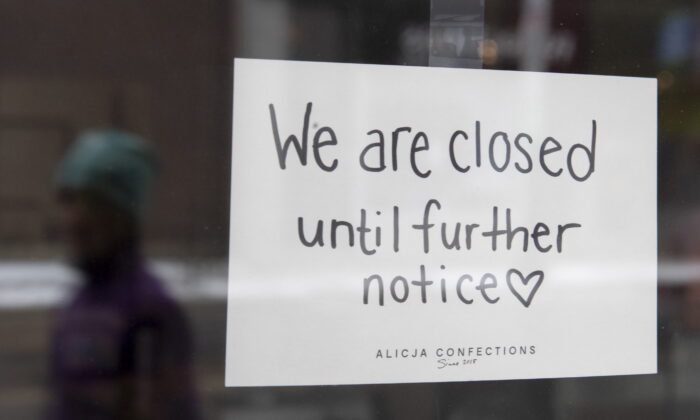 A sign on a shop window during the first pandemic lockdown, in Ottawa on March 23, 2020. (The Canadian Press/Adrian Wyld)
Canada

The number of family-run small businesses across Canada plummeted from levels prior to COVID-19 lockdowns in early 2020, a report from the federal Department of Industry shows.

“Since the last iteration of this survey in 2017 there has been a substantial decline in the percentage of small and medium-sized enterprises owned by members of the same family,” said the report, according to Blacklock’s Reporter.

Titled “SME Profile: Ownership Demographic Statistics,” the report shows that, since the first lockdown in March 2020, Canada has lost 62 percent of its small businesses owned and operated by married couples or individuals belonging to the same family. This is an increase of 14 percent from last year.

A 2021 report by the Department of Innovation, Science and Economic Development titled “Key Small Business Statistics” found that, from 2019 to 2020, both private-sector and small-business employment “decreased in all provinces.”

The significance of the employment and small-business decrease is highlighted by the fact that, from 2001 to 2018, the number of businesses in Canada grew every year except for 2013 and 2016.

The report also said that small businesses across the country were “less likely to increase employment, be able to take on more debt, and have the liquid assets to operate.” They were also less likely to have an optimistic 12-month outlook and expect increases in demand for their goods and services over the beginning of 2022.

Dan Kelly, CEO of the Canadian Federation of Independent Business, said in a 2021 submission to the Senate finance committee that the federal government’s lack of assistance for businesses during the pandemic was “deeply shameful.”

“The average small firm prior to the third wave took on $170,000 in additional debt,” said Kelly. “That’s debt they will carry with them through the recovery phase that we hope to get to.”

Canadian small businesses entered the pandemic with over 7 million employees, but lost almost 10 percent of that total during the crisis, Blacklock’s said.