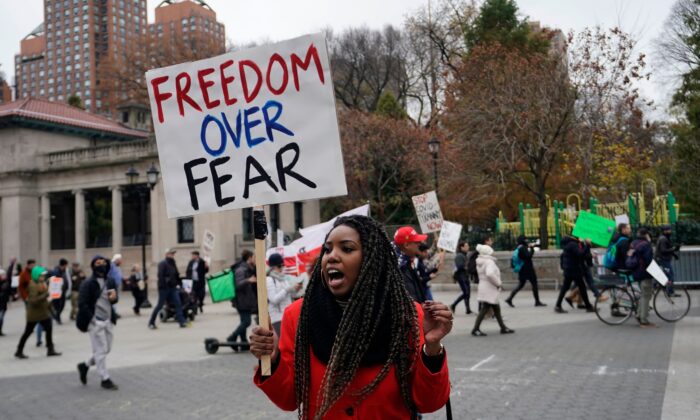 A protester holds a sign during an anti-lockdown protest in New York City, on Nov. 22, 2020. (Timothy A. Clary/AFP/Getty Images)
Viewpoints

I can’t escape COVID restrictions. Irrespective of my vaccination status, my personal risk profile, or my individual desires, they follow me everywhere. I live in New York City. I can’t go into a subway, coffee shop, gym, museum, restaurant, or college class without confronting them. But, with time, the precautions have made less and less sense.

At the beginning of the pandemic, I was abundantly cautious. As ridiculous as it feels to admit in retrospect, I diligently washed my chip bags before putting them in my cabinet. Nobody had any clue what this disease was, how it spread, or where it came from. So I erred on the side of caution.

But, since COVID-19 has intruded into just about every aspect of my life, I’ve found it worthwhile to vigorously engage with data and research. Lots of our unanswered questions at the beginning of the pandemic have since been answered, and many of our precautions proved futile.

As soon as I learned the virus didn’t transmit via surfaces, I gave up scrubbing my chip bags. And yet it’s as though everyone else is still washing theirs. Why haven’t obscure precautions been retired? Have people not engaged with the data? Have they not done their own research? Have they not come to their own conclusions?

Where has common sense gone?

The public attitude toward the pandemic, at least in my city, has been consistent deference to authority. Masks are an appendage, regardless of context or vaccination status. I often see people wearing them while driving alone in their cars. And restrictions are unquestioned, no matter how contrived they may be.

People passively wait to be given answers by authority rather than searching them out for themselves. It’s hard to imagine how this herd mentality can persist. Faith in our institutions, our politicians, and our media have been eroded time and time again, and yet they seem not to crumble.

The virus originated just blocks away from a virology lab, but you were told that a wet market was the source, and suggesting otherwise was inexplicably racist. We learned early on that risk of outdoor transmission was infinitesimally small, and yet you were told to keep wearing masks outdoors and not to question the closure of parks and open venues.

In many cities, restaurants were forced to shutter their indoor dining but allowed to construct enclosed outdoor dining structures on sidewalks. Don’t question whether eating in a puny, unventilated box is safer than spacing out inside a restaurant. Oh, and don’t forget, all bars and restaurants must be closed by curfew, because everyone knows the virus only transmits after 10 p.m.

If you’ve been thinking critically throughout the pandemic, you know the feeling of being let down consistently, of losing faith in the institutions you thought you could trust.

Those of us who don’t blindly defer are often accused of being stubborn. We’re told most restrictions are minor inconveniences. Why not just suck it up? Sure, there’s truth in the fact that not every objector is a conscientious one. But many are.

We’re disparaged as anti-mask, anti-vaxx, anti-whatever it may be—but that’s a false binary. I’m not unilaterally opposed to cautiousness. I don’t like being defiant or breaking rules. But there’s something I dislike far more: betraying my own conscience. Civil disobedience is necessary in the face of arbitrary rules. The pandemic is strangling our freedom to think.

Arbitrary restrictions have run awry. Our leaders, most of whom don’t even have medical credentials, have been enabled by the deferent mob to arbitrarily encroach upon freedom and absolve themselves of the burden of proof. The message: Our higher-ups don’t trust us regular folk to think for ourselves. They’ve decided it’s their role not to represent our will, but rather to protect us from our ignorance.

I, for one, will not hand over my freedom to think. I will continue to engage with the data, to trust in myself, and to defer only to common sense. It doesn’t matter how small the inconvenience is or how minor the freedom that’s being restricted. If I capitulate and allow myself to act in conflict with my personal constitution on a small matter, who’s to say where that slippery slope will lead?

Rikki Schlott
Follow
Rikki Schlott is a writer and student based in New York City. As a young free speech activist, her writing chronicles the rise of illiberalism from a Generation Z perspective. Schlott also works for "The Megyn Kelly Show" and has been published by The Daily Wire and The Conservative Review.
@rikkischlott