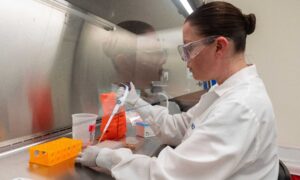 Next in Coronavirus Tyranny: Forced Vaccinations and ‘Digital Certificates’
0

How Many Lives Will Politicians Sacrifice in the Name of Fighting COVID-19?
0 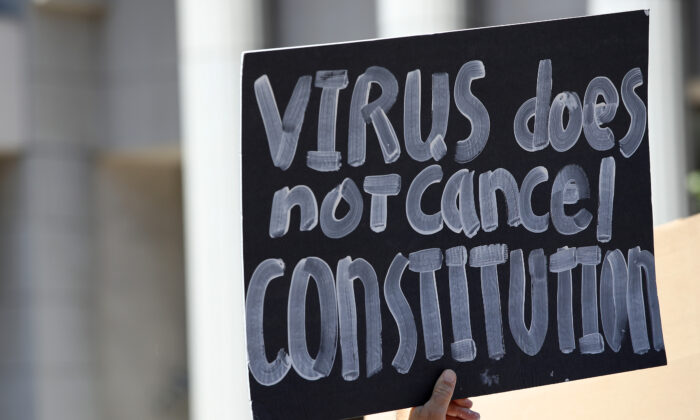 Activists hold signs and protest the California lockdown due to the coronavirus (Covid-19) pandemic, in San Diego, Calif., on May 1, 2020. The protesters demands included opening small businesses, churches as well as support for President Trump. (Sean M. Haffey/Getty Images)
Viewpoints

COVID Ethics: It’s Immoral to Confine Innocent People Who Might Be a Threat

A few weeks ago I presented a libertarian take on the ethics of the lockdown. Following Murray Rothbard in his ”Ethics of Liberty,” I argued that the government has no right to confine or quarantine innocent people, even though it might lengthen some lives. The government is not the just owner of the streets. Rather citizens or taxpayers are, and consequently have the right to use their streets. Moreover, anyone is innocent until proven guilty and cannot just be assumed to intentionally be infecting others with a deadly virus.

However, there are some who claim the moral high ground and maintain that it is unethical to leave one’s house during the corona epidemic. Their argument is that by leaving one’s house one could contribute to the transmission of a deadly virus. People can be confined during a pandemic such as the present one, because they are (potential) aggressors. Anyone could unknowingly carry the virus and transmit it, and therefore poses a potential threat to the health of others.

My reply is that preemptive violence cannot be justified against someone who is just a potential aggressor. One must prove beyond any reasonable doubt that someone is infected and wants to infect others. It is unethical to use defensive violence without having proven an imminent attack.

As long as streets are not fully privatized, however, the question remains: Should there be any restriction on the use of streets for their owners, the citizens? It seems reasonable not to allow negligent behavior when it endangers the private property of others, such as other street users.

For example, a drunk driver who is not in control of his car and does not keep a prudent distance could be considered to be acting negligently, and it seems to be justified to pull this driver over. Applying this reasoning to the corona epidemic, someone who is infected with the virus and does not keep far enough away from others or sneezes in the street without covering could be asked to take precautions or be sent back to his property. What is clearly unjust and disproportionate is to prohibit everyone from driving because of the mere possibility of negligent driving, or to quarantine everyone because there’s a risk of infection.

To make the point more pronounced I will apply this reasoning to a useful example provided by Walter Block: imagine someone aiming a deadly arrow at a tree on his property. The assumption is that if he misses his target, the arrow will fly into his neighbor’s property, possibly hurting innocent people. Is shooting the arrow negligent behavior that should be stopped? Depending on the exact circumstances, so it seems. However, it does not justify quarantining the general population. First of all, not everyone owns a bow and arrow. Similarly, today not everyone has the virus and can “shoot” it at others. Second, not everyone who owns a “bow and arrow” (is infected) “shoots” (spreads germs) negligently in the direction of their neighbors.

If confining everyone because they could become infected, and in addition could act negligently, is justified in the case of the epidemic, one can make an analogous argument in the case of the bow and arrow: anyone could in principle purchase a bow and arrow and could in principle shoot arrows negligently. Hence, anyone is a potential “arrow threat” and everyone must be locked up in their homes. Or, alternatively, the sale of bows and arrows must be prohibited. However, this clearly violates private property rights. The violators of private property rights, far from occupying the moral high ground, must be considered criminals.

If we allow the use of violence against innocent people because they are a potential risk or threat to others, then there will be virtually no limit to the coercion that can be justified. For instance, in World War II the U.S. government interned Japanese people and U.S. citizens of Japanese ancestry in concentration camps, because these citizens were assumed to be a threat. They were expected to commit acts of sabotage killing innocent people. Possibly these acts of sabotage would encourage others to copy these acts, leading to more and more acts of sabotage and the loss of the war. Even if we grant that there was a higher risk that U.S. citizens of Japanese ancestry would commit such acts, this does not justify the internment of innocent people. One must prove that someone is planning to commit an act of sabotage. The proof must be presented for each individual. Responsibility is individual, never collective. If we allow violence based on collective guilt, there is no limit to violence.

Why not, as a preemptive measure, lock up ethnic groups that have had a higher probability of committing crimes in the past than other groups? When we allow violence against someone who is considered a threat based on statistics, there is no limit to violence.

And what about other infectious diseases? If infecting others with the coronavirus is an aggressive act, what about infecting others with the flu or a mild cold. A mild cold can develop into a severe problem for someone with a weak immune system. These are just differences of degree. If one of these instances is an aggression and immoral, the others are, too. What is a fair punishment for someone who spreads a cold? Shall we quarantine the whole population every winter because thousands die from the flu? If we follow this reasoning, there is no limit to violence.

Why not confine the whole population all the time? It saves lives (or could save at least some lives in the short run). There always exists a risk that someone will catch a new, unknown virus, let’s say COVID-20, and will infect others, becoming an “aggressor.” Following this reasoning, anyone is a potential threat to anyone else—just by being alive and in contact with others, because he may spread bacteria and viruses. There is no limit to this reasoning.

We live in nature and with things that we do not control completely. Unfortunately, accidents also occur. Life is risky. Let’s suppose that a driver’s tire was punctured on the highway, leading to an accident that hurt others. The person was a careful driver whose car had recently passed inspection. What happened was not due to the driver’s negligence, but an accident. It certainly does not justify prohibiting all driving. Is the transmission of a cold, flu, or the coronavirus not often more akin to an accident than a criminal act? If we cannot prohibit driving because of the possibility of accidents, we cannot quarantine people because they could accidently spread a cold or flu.

Let us take another scenario from driving. What if someone tries to cross a highway on foot or in a wheelchair and is hit? Is the solution to oblige everyone to drive five miles per hour on highways from then on because there exists the possibility that someone in a wheelchair might try to cross and could get hurt? It makes more sense to create a crossing for those who are in danger of being hit, or for them to find safer paths to their destinations. In the case of the corona epidemic, older people with preexisting illnesses can take precautionary measures and isolate themselves if they want to. If we allow violence to be employed against innocent people because someone else may benefit from it, there is no limit to the violence that can be employed.

Philipp Bagus is professor at Universidad Rey Juan Carlos. He is a Fellow of the Mises Institute, an IREF Scholar, and the author of numerous books including “In Defense of Deflation,” “The Tragedy of the Euro,” and is coauthor of “Blind Robbery!,” “Small States. Big Possibilities: Small states are simply better,” and “Deep Freeze: Iceland’s Economic Collapse.”