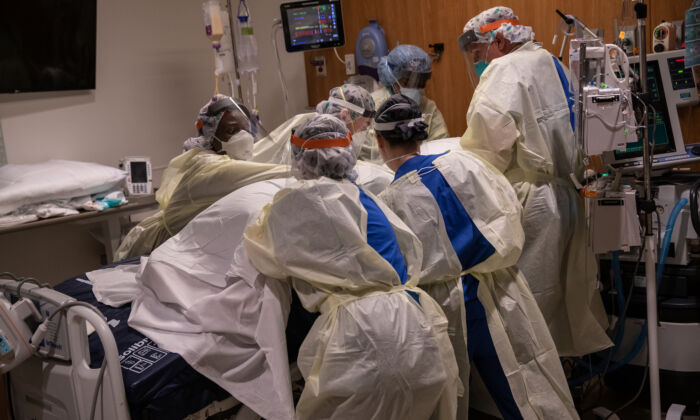 With the lifting of most pandemic restrictions, cases of COVID-19 have slightly increased across Ohio and throughout the nation.

On May 19, Ohio’s director of health Bruce Vanderhoff said the increase in early-to-mid May was due to virus variants lingering.

The rise was around the time the pandemic’s U.S. death toll reached 1 million people.

Vanderhoff said there were 582 people hospitalized throughout Ohio with the virus; a substantial drop compared to the more than 6,700 being treated in hospitals on Jan. 11 during the height of the pandemic.

Despite those numbers, Vanderhoff said Ohio is still doing well in comparison to the case spikes experienced in the winter months, and in surrounding states.

Across the country, 4.6 million people were hospitalized between April 1 and May 17.

At Premier Health’s Miami Valley Hospital in Dayton, Ohio, just 12 people were hospitalized, and it was down to one COVID-19 patient about a month ago, according to figures from the healthcare network.

There has not been a COVID-related death reported from Miami Valley Hospital in about a month.

Unlike early on in the pandemic—when many older people or seniors were diagnosed with the virus—now a wider age range of people are getting it.

Of Ohio’s 88 counties only one remains yellow, or on a higher alert level. The rest of the counties are green meaning the number of transmissions is low, according to the ODH.

Lawrence County is the only one not yet in the green category. It is Ohio’s southernmost county, is situated along the Ohio River, and has a population of slightly more than 58,000.

“This tells us that immunity, especially from vaccines, is making a difference,” Vanderhoff said.

“This is good news as we head into warmer weather, but we need to take this opportunity to prepare for the fall when more of us are indoors or to prepare for unanticipated changes in viral activity,” he added.

Nationally, 81 percent of counties throughout the United States are green, and four percent are orange or on a higher alert, Vanderhoff said.

Vaccination (two shots with one booster) remains the best mode of defense, Vanderhoff said, but he also alluded to therapeutic methods such as intravenous monoclonal antibodies or Paxlovid being vital tools.

However, Vanderhoff stressed that therapeutic methods should not be used as a sole alternative, but could be used in addition to the vaccines, and to consult a doctor before using therapeutic antibodies.

State numbers show that about two-thirds of eligible Ohio residents have started the vaccine process. Vanderhoff said the state’s vaccination rate combined with those who have already recovered from the virus has made for a “substantial level of protection against severe illness.”

Dr. Joe Gastaldo, director of infectious diseases with the OhioHealth Physicians Group, was present at the press conference with Vanderhoff.

Vanderhoff had Gastaldo speak on the effectiveness of the vaccines, and with cases slightly increasing earlier in May, Vanderhoff asked him if that meant the vaccines were no longer working or weren’t as effective as they were early on.

Gastaldo said that the vaccines were continuing to do what they were supposed to do.

“The vaccines are continuing to work well and are performing extremely well,” Gastaldo said. “They were never intended to stop all infections but to prevent severe illnesses resulting in hospitalizations and death.”

The Food and Drug Administration authorized the use of Pfizer’s COVID-19 vaccine for children ages 5 and older on May 16. The next step in that process is to await approval from the CDC.

“I feel confident that that process is going forward and that we will likely have that vaccine available sometime this summer, or late summer,” Gastaldo said.