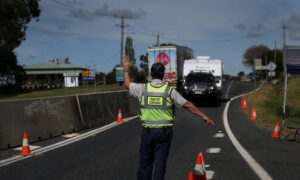 A health alert has been issued by Queensland authorities after a woman tested positive for coronavirus on returning to Japan after a stay in Brisbane.

The notification is for Virgin flight VA962 from Brisbane to Sydney on Aug. 17 and for anyone at The Jam Pantry café at Greenslopes on Aug. 16.

Queensland’s Chief Health Officer Jeannette Young said the woman arrived in Australia in mid-July and quarantined in Sydney before coming to Brisbane.

“While in quarantine, she returned two negative test results,” Young said on Aug. 19.

“Because she quarantined in Sydney and travelled straight to Brisbane from hotel quarantine, she could go about her normal life in Brisbane.

“However on her arrival to Japan on Aug. 18, she was asymptomatic but returned a positive COVID-19 result.

Six close contacts of the woman in Brisbane have been tested and are now in quarantine, while tracing continues.

Those on the flight or who dined at the cafe have been told to monitor for symptoms and get tested if any develop.

The alert comes after a man who recently returned from Papua New Guinea became Queensland’s latest case of coronavirus, prompting the state to beef up monitoring of its porous northern border.

The man in his 40s had been in hotel quarantine and tested positive on the seventh day of his 14-day isolation period.

“That means that he hasn’t been in contact with anyone out in the community,” Young said.

“We know there are increasing numbers of cases in Papua New Guinea, so we’re working very closely with Border Force to manage our northern border with Papua New Guinea.”

The issue will be discussed further when the national cabinet of federal, state and territory leaders meets on Aug. 21.

“We need to keep our measures in place,” Palaszczuk said.

Deputy Commissioner Steve Gollschewski said people were still doing the wrong thing, citing the case of a person who tried to enter the state by road, was denied and then entered on the wrong side of the road. They were fined $4000.

“Queensland is in a very good state when it comes to community transmission … and that’s because we are keeping our borders secure,” he told reporters.

Queensland Police monitored 28 incoming domestic flights in the past 24 hours carrying 1945 passengers and while none were denied entry, 88 were sent into hotel quarantine.

At the border, 3939 vehicles were checked and 181 people refused entry, while 110 were sent into quarantine.

There are six active cases in Queensland, with three of them in hospital but none in intensive care.

The state has now made it through 30 days without a case of community transmission.