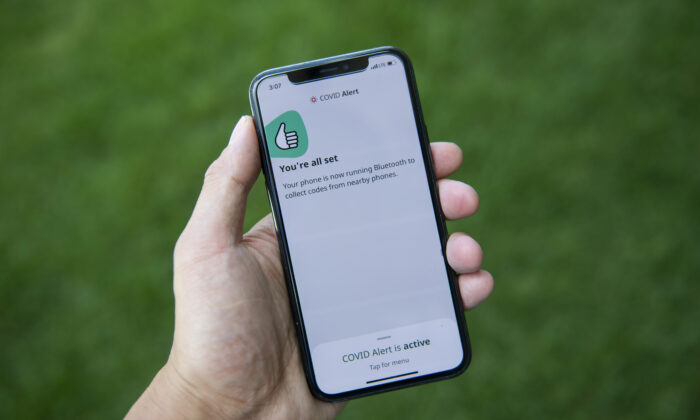 The COVID Alert app is seen on an iPhone in Ottawa, on July 31, 2020. (Justin Tang/The Canadian Press)
Canada

The federal government “gave up” on the COVID Alert app months ago, terminating support for the contact tracing report system due to its “low uptake,” Newfoundland and Labrador’s health minister said.

“The federal government gave up on COVID Alerts app some time ago, several months before Christmas,” Dr. John Haggie said in a press conference on Wednesday, following a question on whether the government has abandoned sending COVID Alert codes to people who tested positive for COVID-19.

“They’ve stopped supporting it and they stopped updating their dashboard. The uptake was so low that the effort to maintain those sites was unreasonable given the fact it was yielding so little,” he said.

The app requires an infected person to proactively send out an alert to others nearby via Bluetooth using a one-time code obtained from the provincial health authorities. An exposure is recorded only when the user is within 2 metres of the individual infected with COVID-19 for 15 minutes for longer.

Prior to the rollout of the vaccines, the federal government had promoted the COVID Alert app as a critical tool for the country in the fight against the coronavirus. The government had spent at least $20 million on developing and advertising the app, Global News reported.

The app has close to 6.8 million downloads, according to the Government of Canada webpage introducing the COVID Alert app—which was last updated in August 2021—yet the one-time key was only used roughly 37,000 times.

Many provinces have shown disinterest in the system, with British Columbia, Alberta, Nunavut, and Yukon never adding it to their COVID-fighting toolkit.

Haggie’s disclosure comes as Canada struggles with rising COVID-19 cases and the new Omicron variant. Canada surpassed a total of 2 million cases during the Christmas holidays, with provinces such as Quebec, Ontario, and Manitoba reporting single-day records on Wednesday.

Some provincial governments have turned to other methods of handling contact tracing in light of the climbing cases, such as Manitoba’s decision to leave the task to citizens.

South Africa has recently halted contact tracing as a method for screening COVID-19 infection while ending quarantine for asymptomatic cases, as the country shifts toward mitigation rather than containment strategies in dealing with the pandemic.