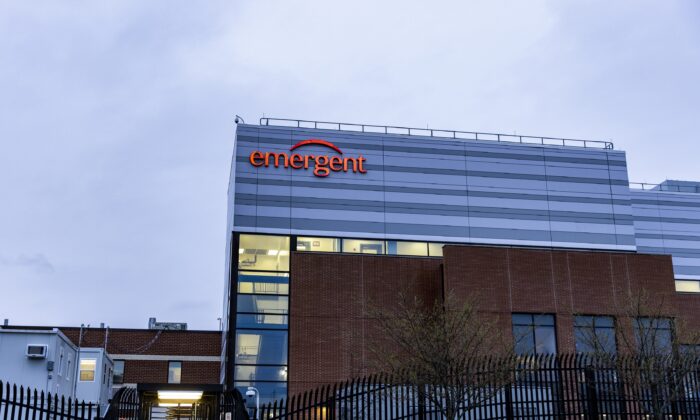 Executives at a company that produced millions of COVID-19 vaccine doses attempted to hide evidence that some of the doses were contaminated, according to a congressional report released on May 10.

Emergent BioSolutions “took repeated steps to conceal its quality failures from the federal government and other third parties by limiting access to Bayview, tampering with drug-substance labels to impede FDA oversight, and strategizing to withhold information from HHS following the cross-contamination event in March 2021,” a report from the House Oversight Committee and the Subcommittee on the Coronavirus Crisis concluded.

The Food and Drug Administration (FDA) and its parent agency, the Department of Health and Human Services (HHS), identified deficiencies in the manufacturing process at Emergent’s Baltimore, Maryland facility—known as Bayview—in 2020.

In early 2021, Johnson & Johnson announced that up to 15 million doses of its COVID-19 vaccine at the facility became contaminated.

Documents obtained by the committees showed that Emergent rejected requests from Johnson & Johnson to visit the site around that time ahead of a follow-up FDA inspection.

One email from a consultant hired by Emergent indicated that employees removed quality-assurance tags from containers of Johnson & Johnson’s vaccine drug substance just before inspectors began their tour and put them back into place after inspectors left. The tags alerted employees that portions of the batches were potentially unable to be used.

Several days later, the consultant said that the tags were removed to “avoid drawing attention” to the potential quality issue.

Internal communications obtained by lawmakers show top executives at Emergent were aware of what happened.

Despite the tag removal, the FDA identified problems during the inspection.

In March 2021, another cross-contamination issue was identified by Johnson & Johnson, but Emergent did not alert AstraZeneca—whose vaccines Emergent was also manufacturing—and HHS for three weeks, according to the new report.

When an HHS agency asked for details, an executive said that no details should be shared with the government until its investigation was over.

“Today’s report shows that Emergent profited from the pandemic while violating the public’s trust. Despite major red flags at its vaccine manufacturing facility, Emergent’s executives swept these problems under the rug and continued to rake in taxpayer dollars,” Rep. Carolyn Maloney (D-N.Y.), chairwoman of the House oversight panel, said in a statement.

Approximately 400 million doses of COVID-19 vaccines were destroyed because of the contamination issues.

“These doses were squandered despite repeated warnings from employees, outside consultants, pharmaceutical companies, and FDA regulators that the company’s manufacturing practices were unsafe and that it was unlikely to fulfill the contract recklessly awarded by the Trump administration. Emergent executives prioritized profits over producing vaccines in a responsible manner that complied with FDA requirements,” Rep. Jim Clyburn (D-S.C.), chairman of the subcommittee, said in a statement.

Emergent was operating on a $628 million contract awarded during the Trump administration. The Biden administration canceled the contract in late 2021.

In a statement issued in response to the new report, Emergent said the report contained nothing new.

The company also said it did not knowingly mislead the FDA, other government agencies, or private partners.

“During the last few years, the FDA and other international regulatory authorities have visited Emergent facilities dozens of times. On several occasions, Emergent invited FDA personnel to visit Bayview to review our progress, assess our capabilities, and provide feedback on our facilities, processes, and systems when no FDA inspection was required. Further to that point, the single contaminated batch was brought to the attention of the FDA by Johnson & Johnson and Emergent,” the company said, adding that it has been in “constant communication” with the FDA and its clients as it tried to manufacture the Johnson & Johnson and AstraZeneca vaccines.

“Emergent remains committed to being a trusted partner of the U.S. and allied governments helping to supply medical countermeasures for biological, chemical and nerve agent attacks. We will continue to use our more than 20 years of public health preparedness experience to help inform an all-of-the-above approach to help prepare for the public health challenges to come,” Emergent said.